Richard Jewell brings the story of a 1996 Olympic bombing to life. 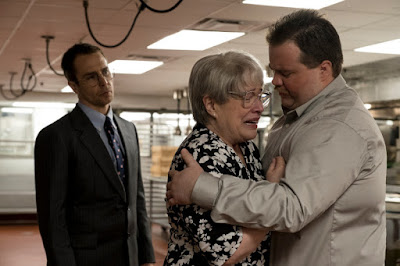 Clint Eastwood tells the story of an innocent man who was convicted by public opinion in Richard Jewell, a movie that exposes the media frenzy that turned Jewell’s life into a nightmare. Jewell, you’ll recall, worked as a security guard at the 1996 Summer Olympics in Atlanta, site of a bombing that killed one person and injured 111.

It didn’t take long for Jewell to make the transition from hero to goat when word leaked that he had become a prime suspect in the bombing. Evidently, investigators — in this case, the FBI — routinely consider anyone near the site of a bombing to be a potential suspect. After discovering the bomb in an abandoned backpack, Jewell guided people to safety. None of that got him off the hook.

Jewell (Paul Walter Hauser) makes for an unlikely main character. He aspires to be a policeman, but can’t find his way into that world, even losing a job as a college security guard. He’s overweight and lives at home with his mother (Kathy Bates). Jewell’s "suspicious" profile — a loner who lives with his mom — makes matters worse for him.

Watching Hauser, you may wonder whether Eastwood has cast a real person in the role. I don't say that as criticism but as praise. An experienced actor, Hauser proves entirely convincing as a man who can’t find his niche. Eager to be part of law enforcement, Jewell constantly overplays his hand. He expects the police to treat him as a willing colleague.

Jewell finds an ally in Watson Bryant (Sam Rockwell), an attorney who believes in his client's innocence and works to clear his name. No stranger to colorful characters, Rockwell makes for an intriguing figure, an idiosyncratic lawyer who sometimes finds his client exasperating.

The two characters who represent the government and the media don’t fare nearly so well.

Wilde’s portrayal of reporter Kathy Scruggs has been criticized by The Atlanta Journal-Constitution, the paper at which Scruggs plied her trade. Scruggs is no longer alive, so it’s impossible to hear what she has to say but a scene in which Scruggs comes on to Shaw in a bar made me skeptical. It goes way beyond calculated flirtation, making it seem as if Scruggs is propositioning the agent.

As someone who worked in journalism for almost 40 years, I never knew or heard of any female reporter behaving in such an unprofessional fashion. That doesn’t mean it couldn’t happen but I didn't buy it.*p>
The FBI takes it on the chin, as well. Despite evidence that suggested that Jewell couldn’t have planted the bomb, the FBI persisted in keeping him a suspect. To the end, Hamm’s character insists on Jewell's guilt.

Reservations aside, Richard Jewell clearly shows how eager reporting can ignite a storm capable of ruining a person’s life. But any journalist who investigates the Jewell case beyond what's seen on screen must ask him or herself what they would have done if they had credible information about a suspect in a crime that had captured international attention.

Watching the FBI invade Jewell’s home and remove evidence provides an abject lesson in what it means to be demeaned by an investigative process. It looks bad now that we know Jewell was innocent: Had it turned out that Jewell was guilty, however, would anyone have complained?

Jewell died a few years after the movie ends. He was 44. Eastwood’s movie leaves you wondering whether he ever recovered from his ordeal, and we feel for him. It’s possible to take issue with some of the ways Eastwood treats the story and still believe that Jewell was badly wronged, thanks in no small part to Hauser's performance as a guy who flounders as he loses control of his life.

Flaws and all, Richard Jewell serves as a reminder that when outrage reaches fever proportions, no one benefits.

*If you're interested in reading more about the Scruggs controversy try this Washington Post article.
No one disputes the fact that a ruinous media frenzy surrounded Jewell once a story naming him as a suspect had been published. That would have been no less true had the movie shown Scruggs writing a story for which she had received a credible tip and left it at that.