The women who toppled Roger Ailes

Bombshell tells a topical story about sexual harassment. A scattered movie has some impact. 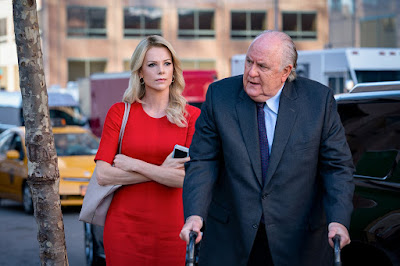 Charlize Theron, Nicole Kidman, and Margot Robbie lead a #MeToo charge in Bombshell, a story about the ways in which the late Roger Ailes was toppled for abusing his power as the head of Fox News. Ailes not only gave the network its trademark rightward slant, but he also used his position to sexually harass some of the women who worked at Fox.

When Bombshell finally gets around to the serious business of watching Ailes dethroned, the movie makes an impact. Powerful men who use their positions as casting couches deserve to be scorned and Bombshell satisfyingly makes sure that Ailes gets his well-deserved comeuppance.

But Bombshell also is a mixed bag of a movie that swirls is way across the screen as if the ingredients have been put into a soda can and shaken. It’s part the story of Megyn Kelly (Theron) and her gradual disaffection with Aisles; it's part the story of an evangelical working girl (Robbie) who's sullied by the toxic Fox atmosphere and part the story of Gretchen Carlson (Kidman), the woman who sued Ailes for sexual harassment, beginning a series of disclosures that would finish Ailes’ career.

Theron makes Kelly a cool customer, highly capable and sensitive to political intrigue inside and outside the Fox empire. Having once been an Ailes target (she resisted), Kelly mixes control with ... well ... more control.

When we meet, Kidman's Carlson she's on the downside of ambition, on the verge of being banished to the afternoon TV dead zone. Carlson, however, was smart enough to know that if she planned to challenge Ailes, she better have evidence. She taped a year's worth of her conversations with him.

Make-up and impersonation combine to create plausibility as far as Kelly and Carlson are concerned, but there’s a double edge to this approach. So much work has gone into making the actresses look like the real-life characters they’re playing, it’s sometimes difficult not to confuse performance with mimicry. Theron’s acting is exceptional, but she has an unnatural look, something on the order of an anchor mannequin.

Robbie doesn’t have that problem because she’s playing a fictional character. Her Kayla Pospisil is taken underwing (and into the bed) by a lesbian producer (Kate McKinnon) on the Bill O'Reilly show.

The movie initially treats Kayla’s naivete (she's a fundamentalist Christian who seems comfortable in a same-sex dalliance) with straightforward amusement that's in keeping with the nutty spirit that director Jay Roach brings to the movie until he gets serious.

Bombshell begins with one of Kelly's career highlights, the night she asked then-candidate Donald Trump about his women problem at a debate of Republican candidates. After the debate, Trump famously responded by saying that Kelly had "blood coming out of her eyes, out of her wherever." The fight's on, and Kelly begins to feel the pressure.

Kelly eventually retreated, conducting what some saw as a conciliatory interview with Trump. Kelly's husband (Mark Duplass) criticizes his wife for going easy on Trump as she tried to negotiate the choppy waters of career and principle. She says she just wants to stop the flow of Tumper venom that has been directed her.

Swimming in a fat suit, Lithgow’s Ailes proves imposing but he doesn’t seem as in-the-know as we might expect. He comes across mostly as a right-wing pasha.

Ailes’ harassment MO emerges in a meeting between Kayla. Ailes insists that TV is a visual medium. It’s only fitting then that he asks Kayla to standup up and "give him a twirl" (a 360-degree spin) and then to hike her skirt until he’s satisfied that she’s air-worthy. It's obvious that Ailes is more interested in compliance than looks because the ambitious Kayla isn't what you'd call a modest dresser.

There's not much to the rest of the men at Fox. The actor who plays Chris Wallace (Marc Evan Jackson) doesn't look like him. And Richard Kind lands with a thud in a brief appearance as Rudi Giuliani. Look, I’ve seen Rudi Giuliani and ... well ... you know the rest of the statement.

Showing some much-needed gravitas, Malcolm McDowell makes a last-minute appearance as Rupert Murdoch, the ultimate owner of all things Fox.

Roach’s often breezy approach can work against the material. Big Short screenwriter Charles Randolph's screenplay can have a scattered, lightweight feel that takes the edge off what we're seeing.

I'm betting that the industry; i.e., Oscar voters, will find plenty to embrace about Bombshell. It may soothe consciences in a year when the rumbles of #MeToo haven’t settled. But it’s worth remembering that making a movie about sexual harassment isn’t the same as solving the problem. That’s a whole other story.