Terrence Malick's ode to a martyr

A Hidden Life devotes itself to spellbinding imagery as it tells the simple story of a man who refused to serve in Hitler's army. 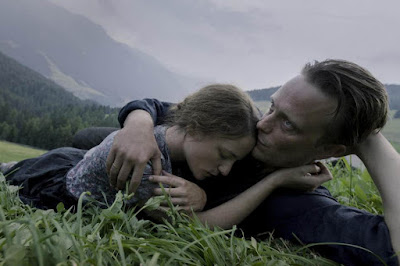 It's not always easy to tell what director Terrence Malick is driving at in A Hidden Life, his three-hour opus about what can happen when deep religious faith intersects with conscience. Taking his movie from an Edenic valley in upper Austria to a grim prison in Berlin, Malick tells the real-life story of Franz Jagerstatter (August Diehl), a farmer who refused to serve in Hitler's army.

The Catholic Church already has honored Jagerstatter. In 2007, while still pope, Benedict XVI beatified Jagerstatter and declared him a martyr. Always ready to assert the mesmeric power of images, Malick treats Jagerstatter as if he already had been beatified. A Hidden Life isn't the story of an ordinary man who does something extraordinary; it's a reverie about a martyr. Jagerstatter's anti-Nazi stance led to his death by the guillotine in 1943.

Unlike in some of his movies, Malick (Tree of Life, Knight of Cups, and Song to Song) allows the movie to unfold in chronological order. But A Hidden Life remains an unmistakable Malick creation. At the outset, Malick bathes his characters in the hallowed light of pre-Anschluss rural Austria, creating a portrait of bucolic innocence.

Malick and cinematographer Jorg Widmer film the Austrian landscapes with reverence. The camera glides over rolling hills as if God were running a finger across the cheek of creation.

Malick, who wrote the screenplay, doesn't get too close to Jaegerstatter, presenting him as a man who embodies a way of life that's presented as if it were a nostalgia-tinged dream.

Early on, we get the idea of a world yet corrupted as Malick portrays life in the beautiful village of St. Radegund. Franz and his wife Fani (Valerie Pachner) pick flowers, play with their three daughters, swing scythes in flowing fields and live in what you might call blessed harmony with the natural world.

Trouble, of course, looms. Jagerstatter soon must leave his village to receive army training. He returns home (possibly with a farmer's exemption) but as the war wears on, he's again called up.

The sticking point for Jagerstatter: He refuses to swear a required loyalty oath to Hitler and finds himself imprisoned. He's told he can serve as a medical orderly, providing he takes the oath. Even when offered a way out, he won't compromise.

The German officials in the film (aside from the brutal prison guards) try to convince Jagerstatter that his sacrifice will mean nothing. No one knows about him. Nothing will change because of what he's doing. The oath is just a bunch of words anyway. They'd rather not put him to death.

As Jagerstatter's imprisonment continues, he's beaten and abused. He prays. He suffers but insists that others surely have it worse.

All of this comes into sharp focus in a private meeting with the judge at Jagerstatter's trial (the late Bruno Ganz).

Diehl isn't given much to say, but he summarizes Jagerstatter's stance in a conversation with a bishop whose advice he seeks before his fateful decision. If God gave man free will, then man is responsible for his choices, says Jagerstatter. The religious figures in the movie provide little help, suggesting that Jagerstatter give Caesar his due and make the best of a bad situation.

At times, we hear Jagerstatter's thoughts or those of his devoted wife, whose interactions with increasingly hostile village neighbors, play counterpoint to scenes of Jagerstatter's imprisonment.

Little of the dialogue can match Malick's imagery. With Malick, though, it's not the words but the music; i.e., the visual environment, that matters. It's not what anyone says; it's what we see.

The use of multiple languages in A Hidden Life can be puzzling. Diehl and his wife speak and think in English. The Nazis mostly speak German. Maybe Malick saw this as a way to remove Jagerstatter from his social milieu, to make him a lone figure who belongs to no one or nothing, except possibly the land.

There have been objections to A Hidden Life, many of them focused on the film's insistence on avoiding depictions of the ravages of war or to deal -- even in passing -- with the fate of the Jews. Jagerstatter objects to the conquering of countries that have done nothing to Germany: He views Hitler as evil without referencing Hitler's greatest evil, the Holocaust.

Moreover, representatives of the state gave Jagerstatter an opportunity to save himself, an option available to no Jew.

Those are fair criticisms. But it's a mistake, I think, to look to Malick for moral prescriptions. To fully appreciate A Hidden Life, you have to allow yourself to experience the elevation that comes from the way Widmer's camera embraces the light, allowing it to become a kind of literal embodiment of spirit. Malik moves slowly because he wants us to live in this light, much as Jagerstatter does.

Beyond that, A Hidden Life devotes itself to the belief -- though perhaps naive -- that the actions of one righteous man matter as much as anything else in history.

I watched a much more down-to-earth version of Jagerstatter's story on YouTube, a black-and-white feature that includes interviews with people who knew him. Titled The Refusal, the movie doesn't approach the cinematic eloquence of A Hidden Life, but it examines how those around Jagerstatter reacted to him in ways that Malick's film ignores. It also sees Jagerstatter as more of a staunch Catholic than Malick does, a man who thought that joining an evil cause would destroy his soul.

Religion emphasis aside, it's possible to conclude from watching A Hidden Life that righteousness sometimes begins with a single individual who's willing to say "no." Malick also invites us to ponder what expressions of individual conscience mean when they can't change the corrupted world in which we find ourselves. A Hidden Life is no scream of outrage at the world’s madness, only a hushed refusal to go along with it when there's no certainty about the outcome.