This look at two very different men loses something when it departs from the Vatican. 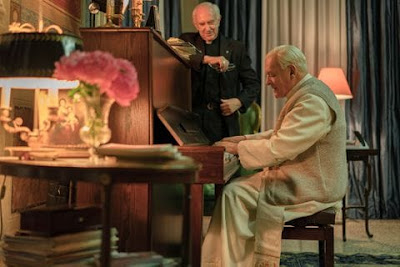 A strange thing happens in Two Popes, a movie about the relationship between Pope Benedict XVI and Jorge Bergoglio, the man who would become Pope Francis. The more the movie opens up, the less intriguing it becomes. When the two men are together -- often in uneasy conversation -- the movie provides something rare, a look at intelligent men having intelligent conversations about the nature of the institution they both love.

Aided by superb recreations of the Vatican environment -- much in the same way The Crown benefits from the imperial splendor of its palaces -- the movie can't help but make us feel that the stakes are high.

More than a clash of values, Two Popes becomes an intriguing battle of personalities and of character and perhaps of the experiences that molded two very different men.

The movie takes place against a political backdrop. The Church is going through a bad patch: financial scandals, accusations about ignoring pedophile priests, and a general decline in European church attendance.

It's the kind of situation that can't help but breed antagonisms. During the conclave at which Benedict is elected, then-Cardinal Ratzinger snubs Bergoglio, who -- according to the movie -- was favored by a substantial number of liberal-leaning cardinals. But the first serious encounter between the two clerics occurs when Bergoglio travels to Italy and meets with the pontiff at Castel Gandolfo, the pope's summer residence.

As they stroll through the papal estate, Benedict can't conceal his disdain for Bergoglio's views, telling him at one point that he doesn't agree with anything that Bergoglio says.

For his part, Bergoglio has traveled to Italy to ask the pope's permission to resign. For reasons that eventually will be made clear, the pope pushes aside Bergoglio's attempts to raise the subject.

The movie then relocates to Rome, where the two men continue their conversations in the Sistine Chapel.

Before I go further, let me say that watching Pryce and Hopkins provides its own form of pleasure. Speaking with an Argentine accent, Pryce finds the mixture of gentleness and backbone in a man deeply committed to a belief that the church must change with the times.

Hopkins, on the other hand, portrays a priest whose strong will is fueled by sharp intelligence and a conviction that eternal values aren't subject to revision. Benedict seems to view Bergoglio's softness as a kind of capitulation.

Watching Hopkins and Pryce proves irresistible, though the story occasionally abandons them for scenes in which a young Bergoglio (Juan Minujin) navigates politically treacherous waters as a Jesuit in Argentina.

According to the movie, Bergoglio emerged from the so-called Dirty War of the 1970s humbled and guilt-ridden. He thought he should have done more to save politically active priests from the ruling junta, the group responsible for the "disappearance" of as many as 30,000 Argentine dissidents. Bergoglio was perceived by some of his Jesuit brethren as a right-wing sellout.

Presented in black-and-white, these Argentine flashbacks to Bergoglio's background take us away from the movie's main event: The jousting between Bergoglio and Benedict. Director Fernando Meirelles (City of God, The Constant Gardener) is at his best when the story remains behind Vatican walls.

Meirelles goes to some lengths to ensure that his characters remain human amid the Vatican's overwhelming opulence. Bergoglio hums Abba's Dancing Queen while washing his hands. Benedict plays piano, switching from classical to more robust German folk tunes. They joke about the Beatles. Toward the end, they watch a soccer game together.

More seriously, as the movie moves toward its resolution, Benedict changes his view of Bergoglio and even credits him for helping him to hear God's voice, which had -- for him -- gone silent. He hadn't lost his faith, only his connection to the God in which he ardently believes, something on the order of a dropped call, I guess.

The movie further suggests that Benedict wanted Bergoglio to become pope. True? I have no idea, but I'm doubtful.

None of that should keep you from watching two of Britain's best actors create a drama of men and ideas. Hopkins and Pryce are in fine form.

I wouldn't have objected had they stayed on screen for the movie's entire two-hour and six-minute length. Recent history tells us that Benedict's view of the church prevails, but on-screen, these two characters deserve to argue forever.