A former convict poses as a priest 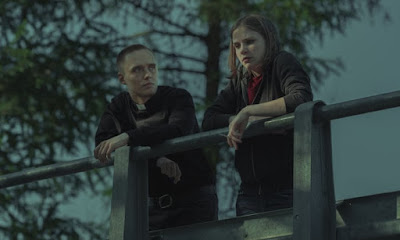 What are the essential qualities of being the leader of a church -- not of a whole religion, but of a single parish in rural Poland? Is ordination essential? Could the empathy and common sense of the man who functions as the town's priest be equally important — even if the young man posing a priest sometimes learns about Catholic ritual from the internet?

In Poland, a nation that's predominantly Roman Catholic, a movie such as director Jan Komasa's Corpus Christi, which poses all of the above questions, might have a different resonance than it does in the US. It occurred to me that Komasa wants his audience to at least ponder whether the "official" church hasn't lost touch with something more essential than priestly bona rides.

The story revolves around Daniel (Bartosz Bielenia). When the movie begins Daniel is being released from a juvenile detention center where he recently watched another prisoner being severely beaten. He's told that, as a former convict, he has no chance of being accepted into a seminary.

A priest (Lukasz Simlat) tells Daniel before he's released that there are many ways to serve other than being a priest. Good deeds aren’t the sole province of those wearing clerical collars.

The first order of business for Daniel upon being released from jail hardly qualifies as spiritual. He gets high and indulges in carnal pleasures unavailable in prison.

He then travels to a small town where he's been instructed to work at a sawmill as part of his rehabilitation. It doesn't take long before Daniel, who believes he has a calling, begins posing as a priest. He takes over the small parish when its priest takes a leave of absence for health reasons.

As it turns out, the town is going through a period of collective grieving. Seven of its younger residents were killed in a recent car crash. The town hasn't come to grips with questions of loss, responsibility, and blame.

As the story progresses, Daniel develops a relationship with Marta (Eliza Rycembel). Komasa keeps us on edge about where this relationship might be heading. We're conflicted. We don't know whether to root for consummation or hope that Daniel keeps his vows. But wait. We must remind ourselves that Daniel hasn't taken any vows.

A provocative premise provides Komasa with a ton of underlying tension. We wonder if and when Daniel will be exposed and if he is exposed what will happen to him.

Komasa ably blends philosophical and practical concerns and obtains a powerful performance from Bielenia, whose closely cropped hair and intense gaze make him look like a penitent or perhaps a religious mystic. He's neither. Daniel doesn't pretend to be a priest to hide from the law or to pilfer money from the collection box. He genuinely wants to minister to his flock and he has his own ideas about how to serve.

As the story unfolded, I began to grapple with an insoluble contradiction. Can there be such a thing as an impostor who's genuinely authentic?

Never reductive or sentimental, Corpus Christi deals with complex issues in a down-to-earth way that can be humorous, intense, and, above all, deeply human.

This is by far the best Corpus Christi review I've read tonight. The ending in particular captures why I still think about the film a week after seeing it.

"As the story unfolded, I began to grapple with an insoluble contradiction. Can there be such a thing as an impostor who's genuinely authentic? Never reductive or sentimental, Corpus Christi deals with complex issues in a down-to-earth way that can be humorous, intense, and, above all, deeply human." Well done.