Anthony Mackie and Samuel L. Jackson play men who learned how to play a rigged game and win -- at least for a while.. 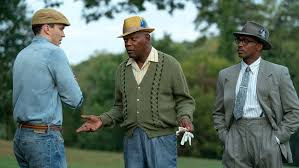 Toward the end of The Banker, Joe Morris — a streetwise nightclub owner played by Samuel L. Jackson — explains why he has joined forces with brainy Bernard Garrett, Jr. (Anthony Mackie) in a plan to circumvent race restrictions and get rich in real estate.

“The game is fun, even when it’s rigged,” says Joe.

When The Banker, which is based on a true story, sticks to Joe's idea, it’s both informative and entertaining. Both Jackson and Mackie are in fine form as very different men who become partners out of necessity. As a black man, Mackie’s Garrett can’t raise sufficient money to enter the real estate game in Los Angeles during the 1950s. Thwarted by the financial establishment, Garrett turns to Morris for financing.

Although he claims to trust no one, Morris becomes involved. He believes in Garrett’s confidence and in his demonstrated ability to master the mathematics required to succeed in real estate.

The movie acquires additional social meaning when Garrett devises a plan to break the color barrier. He’ll school a white laborer (Nicholas Hoult) in how to play the part of a wealthy entrepreneur. Hoult’s Matt Steiner becomes a student with two teachers. Garrett tries to bring him up to speed in math; Morris teaches him how to play golf so that he can associate with the country-club crowd.

Steiner will play a role similar to a ventriloquist's dummy while an unseen Garrett pulls the strings. Garrett and Morris will own everything; Steiner will be an employee.

As the story develops, Garrett also uses his success to engage his social conscience. He rents and sells homes to black buyers in formerly white neighborhoods. He knows that a burgeoning black market can make his plans work.

All goes well until Garrett decides to buy a bank in the highly segregated Texas town where he grew up. Again using Steiner as a front, Garrett purchases the Mainland Bank and begins loaning money to aspiring black businessmen — on the QT, of course. A wary Morris reluctantly goes along.

Every story needs an arc, so we’re pretty sure that Garrett and Morris will hit some major snags, most relating to Texas-style racism. The town's white population would be appalled if they learned that two black men owned the town's bank. How long can Garrett and Morris remain invisible?

Morris proves himself a master of wily pragmatism, posing as Steiner’s chauffeur so that he can keep on eye on his charge. At one point, Garrett’s devoted wife (Nia Long) poses as a cleaning woman so she can observe Steiner, who eventually begins to confuse his faux prowess with the real thing.

Without Garrett's genius, Steiner's bound to mess things up.

Strongest as a commentary on how entrenched racism kept blacks from accumulating wealth, The Banker, director George Nolfi eventually allows the story to bog down in the details of deals that led to Garrett and Morris's undermining. They eventually did jail time.

But Mackie and Jackson never are anything less than convincing as a savvy odd-couple that wouldn't take "no" for an answer. The key: If the front door is locked, look for another way in.

Of course, the overall point trumps the movie's slyer observations: The doors to success never should have been locked in the first place. Or as Joe might have put it: The game shouldn't have been rigged in ways that worked against the smart, well-prepared Garrett from achieving his goals.