Great story, but the movie's only so-so

Jesse Eisenberg plays Marcel Marceau in a movie about a mime who became a hero in World War II. 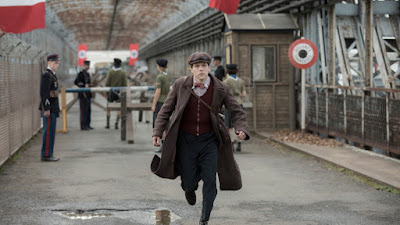 I wish Resistance had been the movie it could have been. Not many of us know that the world’s most famous mime — Marcel Marceau — was a member of the French resistance during World War II and that he risked his life to save many Jewish children from Hitler’s gas chambers.

That’s the core of the story that director Jonathan Jakubowicz tells in Resistance, but the movie only fitfully seems like anything other than a dutiful attempt to add another movie to the Holocaust canon.

Some of the movie's problems have to do with Jesse Eisenberg’s somewhat unexpected appearance in the movie. To me, Eisenberg never seemed like anyone other than Jesse Eisenberg, and it's a bit shocking to read (as I did after seeing the movie) that Marceau was 15 when he joined the resistance and worked to save Jewish children. Eisenberg is 36.

Still, Eisenberg's wired energy always seems to be watchable and he handles the movie's mime duties with ease and elegance.

Too bad Jakubowicz can’t sustain a unifying tone for a movie that wants to celebrate the power of artistry in dark times while not shortchanging how very dark those times really were.

I suppose the movie's greatest virtue lies in its ability to let people know that Marceau was more than an entertainer. Marceau was born Marcel Mangel in Strasbourg, where his father (Karl Markovics) worked as a Kosher butcher. Dad thought his son was wasting his time performing in the city’s cabarets. Marcel thought of himself as an artist.

The apolitical Marcel finds himself drawn into the fray when his cousin (Geza Rohrig) and brother (Felix Moati) ask him to help a group of Jewish orphans.

Marcel — who has yet to take the name Marceau — entertains the kids, helping to lift these Jewish kids out of their confusion and funk.

The movie’s darkest current emerges when the story shifts to Lyon. At that point, Klaus Barbie (Matthias Schweighofer) enters the story. The sadistic Barbie, a.k.a., The Butcher of Lyon, is portrayed as a man Of irreconcilable polarities, a cultured German who became a murderous anti-Semitic sadist.

Through his journey, Marceau is accompanied by Emma (Clemence Poesy), a young woman who had been involved with the orphans from the beginning.

The story is introduced in a post-war ceremony presided over by none other than General George S. Patton (Ed Harris). Patton tells his assembled troops that he wants to share a story about a person who qualifies as a great hero. Marceau served as a liaison officer with Paton's army, so this may have happened but it doesn't add much to the story.

A sequence in which Marceau, his charges and cohorts try to cross the Alps to Switzerland has moments of high tension, but overall the drama feels wooden, what an after-school special might be like if it also included elements of Nazi sadism -- i.e., cold-blooded murder and torture.