A brutal look at slavery and beyond 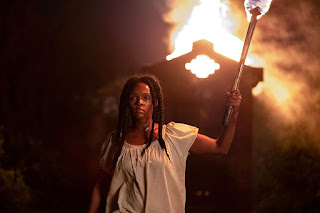 In the heat of our endlessly fractious moment, Antebellum — a movie about the lasting consequences of slavery  — should have scored a direct hit.

Too bad directors Gerard Bush and Christopher Renz  squander some of their movie's power with a gimmicky Twilight Zone flourish that pushes the movie from its purposefully strange moorings into a lesser world, one in which contrivance smothers insight.
Bush and Renz get off to a strong start with a beautifully orchestrated sequence that takes place on what appears to be a prototypical plantation.
An eerily bucolic mood prevails. Horses move slowly. Enslaved women, all uniformly dressed, hang the wash. Every trace of spontaneity seems to have been banished, something on the order of what Margaret Atwood accomplished in Handmaid's Tale.
It doesn’t take long for the directors to reveal the horror that underlies the plantation's placid surface.  Antebellum understands that it's possible and perhaps even necessary to treat parts of American history as a horror story.
The repellant brutalities of slavery are shown in painful detail, but even at that, this plantation seems slightly off-kilter.
The enslaved aren't tormented by the genteel but twisted southerners typically associated with the Old South of movies. Instead, Confederate soldiers run the plantation.
They're  led by an officer (Eric Lange) whose quietly expressed sadism sets the tone. Not only is Lange's character a rapist, but he leads group chants of “blood and soil” that sound as if they've been borrowed from a Third Reich playbook.
Imbuing her role with ferocity and conviction, Janelle Monae plays an enslaved woman named Eden. Eden's only objective: To escape her tormentors.
A malicious white woman (Jena Malone) helps oversee the non-stop brutalization of those consigned to picking cotton and trying to avoid the smirking arrogance of Captain Jasper (Jack Huston), the officer who enforces the plantation's draconian rules.
Because the enslaved workers aren’t allowed to speak to one another without permission, the encounters between Monae’s character and new arrival Julia (Kiersey Clemons) are fraught with tension. The normal made illicit by oppression.
Those who haven’t read much about the movie deserve to approach Antebellum's plot without spoilers.
Know though that Gabourey Sidibe shows up in a small, lively role and that the directors take a leap that's obviously intended to throw an audience off guard as the movie tries to connect past and present.
Unfortunately,  the story’s big reveal proves a letdown and some of the final images try so hard to become iconic that they play like quotations, poster-ready illustrations drawn from the cinematic language of revenge.
Antebellum opens with a familiar high-minded quote from William Faulkner: “The past is never dead. It’s not even past.”
The malodorous vapors of American's "original sin" are still with us, but too often, Antebellum fails to live up to the seriousness to which it evidently aspires.
As a result, the movie's boldness -- and it has some -- jars more than it illuminates.
Posted by Robert Denerstein at 10:35 AM