A gallery for those who've lost in love 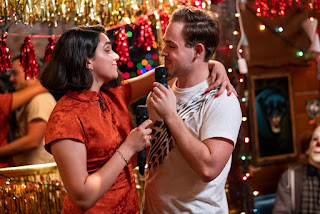 If you don't mind a movie that contains more contrivance than heartbreak, The Broken Hearts Gallery might be just your cup of sugar. I should say that the sugar in this 20something, New York-based rom-com is laced with the kind of humor that might be produced by characters who've spent far too much time on Twitter, a heady mixture of snark. cleverness and complaint.
Almost never at a loss for something to say, the characters in Broken Hearts take a predictable journey in which friendship eventually turns to love, a development that could surprise only  the two characters in question.
Lucy (Geraldine Viswanathan) has a strange habit. She keeps something from each of  her failed relationships, turning her bedroom into a kind of memorial to lost love.
Lucy lives with two roommates: Phillipa Soo's Nadine and Molly Gordon's Amanda. The roommates serve as a kind of Greek chorus, presuming you view a Greek chorus as a device for conveying an endless stream of wisecracks, some funny, some not.
The main story focuses on Lucy. After being dumped by Max (Utkarsh Ambudkar), Lucy meets Nick (Dacre Montgomery). Mistakenly taking Nick for an Uber driver, she climbs into his Prius and ... well ... the rest is pretty much preordained.
As befits a contemporary young person in a romcom, Lucy is going through a bad patch.  Not only has she been dumped, but she just lost her job at a supposedly prestigious art gallery run by the acerbic Eva Woolf (Bernadette Peters).
As it turns out, Nick has a life of his own dream. He's trying to convert an abandoned YMCA into a boutique hotel called The Chloe. Lucy decides that a Broken Hearts Gallery would make a catchy addition to The Chloe.
She'll collect and display the mementos of other people's heartbreaks -- along with a word or two about their stories. Predictably, the idea goes viral.
Really? Even Lucy's enthusiasm wasn't enough to convince me that anything in her gallery might be worth looking at and the stories that accompany all these breakups aren't especially interesting, either.
As for the hotel ... does Manhattan really need another one?
I don't need to say much more. Writer/director Natalie Krinsky (Gossip Girl), concocts a smooth glide across the movie's surfaces with Lucy taking over interior decorating chores at The Chloe.
Charged with carrying the movie, Viswanathan boasts a winning smile, oodles of verve and enough of whatever passes for intelligence in this kind of film to keep the whole business afloat.
But in this romcom, the romance proves as corny as it is predictable and the comedy clings to verbal banter rather than from anything having do with keen observation.
Despite its title, Broken Hearts is selling undisguised optimism.  There's someone for everyone. Money problems readily are solved. Things eventually work out.
And all before anyone in the movie turns 30.
Posted by Robert Denerstein at 3:35 PM