A lovely movie about a father and son 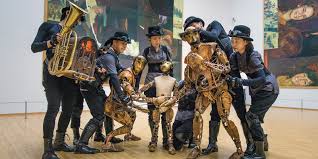 Technically, Our Time Machine qualifies as a documentary, but to call a movie with so much soul a documentary shortchanges its poetry, emotion, and, yes, wisdom. Chinese director Yang Sun and American director S. Leo Chiang tell the story of artist Ma Liang (better known by the single name of Maleonn) and his aging father, Ma Ke.
The story revolves around Maleonn's attempts to deal with his father's dementia by staging Papa's Time Machine, a theatrical puppet show in which a young man tries to invent a time machine so that his father can be returned to his youth, thereby avoiding the ravages of aging.
Ma Ke's deterioration seems extra tragic. Ma spent most of his adult life as a director of operas at the Shanghai Chinese Opera Theater. As he loses memory of his accomplishments, he reduces them to numbers. Again and again, he tells us that he directed more than 80 productions, perhaps as a way to assure himself that his life had worth.
In part, the movie chronicles the difficulties of assembling the show that Maleonn hopes will fulfill a long-held dream of collaborating with his father. Not surprisingly, dad's help has less to do with any tangible contribution than with Maleonn's desire to honor his father before the old man vanishes into the consuming mists of Alzheimer's.
Some of the movie deals with the intricacies of putting on a show. Large-scale puppets are operated by performers who guide their movements. Technical challenges loom, notably finding a way to make hands truly expressive.

As is the case with many artistic endeavors, putting on the show becomes an ongoing confrontation between imagination and possibility.
Not surprisingly, money issues arise. Funding eventually is exhausted.  The team might have to be disbanded. A trip to the US in search of funds proves futile, but the production eventually is mounted.
As intriguing as the staging of a theatrical production can be, the heart of Our Time Machine derives  from the people we meet and their relationships.
Inventive, engaging and devoted, Maleonn gives the film a vibrant center. His previous work consisted mostly of photography and collage, so producing a puppet show proves challenging.
Eventually, Maleonn is joined by a co-director with theatrical experience. Tianyi Huang begins playing a bigger role in Maleonn's life as the movie moves toward an ending that would feel shamelessly contrived if it weren't true.
Affection aside, Maleonn's relationship with his father  wasn't always ideal. Dad was exiled to the country during the Cultural Revolution. When he returned to Shanghai, he spent little time with his son. Believing that he had to make up for lost time, he threw himself into his work.

And, as the movie unfolds, Maleonn's mother (Ma Duo) becomes more vocal about her inability to cope with her husband's decline.
Maleonn eventually arrives at a long view of his father's deterioration, acknowledging that a theater production -- no matter how fanciful -- is no match for the relentless passing of time.
The directors may not dot every "i" and cross every "t,'' but they have created a lovely movie about artistic invention, love and, the acceptance of loss. When it ended, I was sorry to let it go.