Maybe the devil made them do it 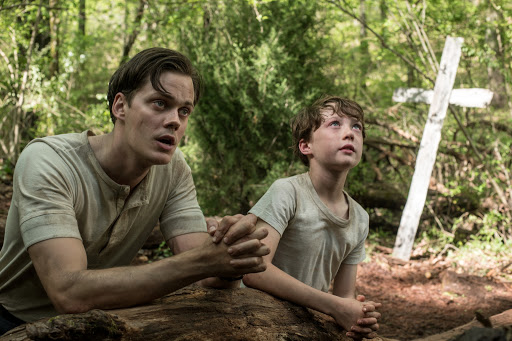 Judging by the characters in The Devil All the Time, some of the folks in West Virginia and parts of southern Ohio are mighty weird, screwed-up in ways once taken for common coin in Southern Gothic literary circles.

Foremost, there’s religion: Faith has made some the characters in this episodic sprawl of a movie crazy to the point where a self-proclaimed preacher believes he can resurrect the wife he has just murdered and a father, believing that a sacrifice will save his cancer-riddled wife, kills the family dog.
These are just a couple of the more lurid examples from director Antonio Campos’ cinematic take on a novel by Donald Ray Pollock, who narrates a taxing two-and-a-half hour Appalachian journey that sometimes feels like a near-parodic take on one of Flannery O’Connor’s novels.
Campos doesn’t skimp on the number of characters who populate his movie, some arriving and disappearing before the story settles on Arvin (Tom Holland), a young man struggling to find his place in this strange, violent world.
It's possible to regard everything before Holland's arrival as prologue. Arvin’s dad (Bill Skarsgard) returns from World War II emotionally bruised, his faith shaken. He recovers his belief when he marries a waitress (Haley Bennett) and they move into a ramshackle  house on the outskirts of Mead, West Virginia.
The death of his mother and the resultant suicide of his father put young Arvin in the care of his grandmother (Kristin Griffin). As Arvin grows into manhood, the story also tracks the twisted progress of a serial killer (Jason Clarke) and his wife (Riley Keough).
Their MO: He takes photos of his victims having sex with his wife before slaughtering them. She goes along with his twisted plans, although she eventually tires of their murderous travels.
A frighteningly intense Harry Melling plays the preacher who believes the Lord will help him resurrect the dead. Mia Wasikowska portrays his hapless wife.
Arvin's grandmother adopts Leonora, the daughter of this less-than-happy couple. Eliza Scanlen plays Leonora as an adolescent.
Sorry to bombard you with so much plot and so many characters, but that's a bit what it's like watching this twisted soap-opera.
Anyway, it doesn't take long for the reverend Preston Teagardin (Robert Pattinson)  to show up. Not surprisingly, Teagardin has pervert written all over him: His idea of doing the Lord’s work involves seducing and then abandoning teenagers.
Let's just say that The Devil All the Time, isn’t the best advertisement for church-going.
There's no faulting the performances. Skarsgard proves unnerving as a father of steely, war-scarred temperament. Holland brings humanity to Arvin, who — despite some violent episodes — self-describes as “not a bad person.” We more or less believe him.
Clark and Keough make an appropriately appalling murderous duo.
To further complicate matters, Keough’s character is the sister of a corrupt local sheriff (Sebastian Stan).
I haven’t read Pollock’s novel, but in his review in The New York Times, Josh Ritter wrote, “Pollock’s prose is as sickly beautiful as it is hard-boiled.”
I can’t say the same for the filmmaking here; sans Pollock’s prose, the movie strips the characters to their bare-bones lunacy and becomes a bit of an endurance test, making us wonder just how much of this ruthlessly unpleasant crowd we can take.
By the end, Campos ties the story’s many threads together,  but to what purpose? In this predator-or-prey environment, it struck me that all of these small-town characters should have reached one inescapable conclusion: Move elsewhere.
Posted by Robert Denerstein at 2:35 PM

If you’re looking for purpose, I suggest you consider looking beyond film.

I wasn’t looking for the kind of purpose to which you seem to be referring. The point I was making — perhaps not clearly enough — was this: I was looking for purpose in the movie, something on the order of a theme or satisfying resolution. I was once on a line at the Sundance Film Festival talking with a fellow moviegoer about festival viewing. He said that he expected to understand why the movie had been made within the first 10 minutes or he’d leave and try another movie. That’s a narrow window, but it’s reasonable for viewers to ask why a movie has been made and to be able to find an answer while watching the film or upon reflection after viewing. Didn’t happen for me with this one.