Is it an art object or a movie? Chicken with Plums takes its time creating sad beauty. 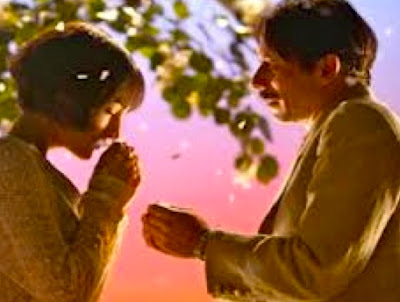 Nasser Ali-Khan is a world-class violinist. But when his wife -- in a fit of rage -- breaks his violin, he stops playing. Nasser finds a replacement violin, but he can't find the spirit required to resume his brilliant career.

As the Iranian movie -- Chicken With Plums -- unfolds, we learn that Nasser's problems extend back to the days before he was unhappily married with children. You see, Nasser loved a young woman like he'd never loved anyone before or since. And she loved him back.

But -- as cruel fate would have it -- the young woman's father refused to let his daughter squander her life with a musician who might not be able to support her. Nasser moved on, but he left his heart behind.

So goes the story told by directors Vincent Paronnaud and Marjane Satrapi, who previously directed the brilliant animated film Persepolis. This time, the directing duo mixes live action and animation for a story that's at once sad and invigorating.

The sadness stems from Nasser Ali-Khan's slow march toward death. The invigoration derives from the intoxicating mixture of realism and artifice that makes Chicken with Plums special, a sobering look at the many consequences resulting from the day that Nasser was denied the love of his life, a woman named Iran (Golshifteh Farahani).

As played by Mathieu Amalric, Nasser comes across as a deeply embittered soul who battles with his wife (Maria de Medeiros), the woman he married when he knew he couldn't have Iran. His wife tries to please him, even cooking his favorite dish, the chicken with plums of the movie's title.

But there's no pleasing Nasser, who eventually takes to his bed, vowing to languish there until he expires.

The ingredients of this fanciful fable are deeply melodramatic, but the movie ripples with humor, and it's so obviously creative that it sweeps you away with a story that involves flashbacks and flashbacks within flashbacks.

Based on a graphic novel by Satrapi, the movie makes a place for the Angel of Death (Edward Baer), a character that eventually catches up with Nasser, not a terribly difficult task because Nasser is not trying to outrun his end.

Spread over eight days, the story takes us through the pivotal events in Nasser's life, including his relationship with his mother (Isabella Rossellini), a woman who pushes him toward marriage.

Because of its exaggerated stylistic flourishes, Chicken with Plums sometimes feels as if it's easier to appreciate than to fully embrace, but when the movie draws to a close, it leaves you with a sweet sadness, honey laced with tears.