A skimpy but often rewarding Frankenweenie 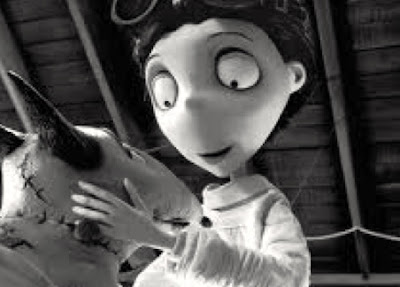 In Frankenweenie, director Tim Burton makes his 1984 short film of the same name longer. Although the result can feel a bit undernourished, Frankenweenie definitely has some splendid moments, many of them a trifle macabre.

Shooting in comforting black and white and skillfully employing the techniques of stop-action animation, Burton tells a story based on familiar horror tropes that he gathers like weird flowers placed into an oddly shaped bouquet.

The story introduces us to Victor Frankenstein (voice by Charlie Tahan), a boy who's having difficulty accepting the loss of his beloved dog Sparky, a happy but hapless pooch that fell victim to an on-coming car.

As it turns out, Victor has an inventive streak, not to mention an attic full of contraptions that look as if they were lifted from the set of any number of low-rent, 50s sci-fi movies.

What's a grieving boy to do? In a Tim Burton movie, he heads to the pet cemetery to dig up poor Sparky, and -- thanks to the revivifying power of lightning -- he reanimates his dearly departed four-legged companion.

Victor learned about the amazing powers of electricity from Mr. Rzykruski (Martin Landau), a substitute science teacher with a slightly ghoulish voice and Transylvanian accent.

To add complexity, Victor and some of his classmates also are competing in their school's science fair. This leads to a wholesale series of reanimations that wreak havoc on the town of New Holland, allowing Burton to bring creature-feature flare to the proceedings.

A giant mutant turtle tramples its way through town in Godzilla-like fashion. A prissy pet cat transforms into a creature that looks like a terrifying cross between a bat and a cat. Sea-monkeys proliferate, creating rampage-like chaos.

All of this because a toothless outcast kid named Edgar 'E' Gore (Atticus Shaffer) connives to use Victor's secrets to his own advantage, pointing the way toward one of the movie's more didactically expressed lessons.

Pay attention here, kids: Whether science is used for good or ill depends on who's doing the using.

Additional voices include Martin Short and Catherine O'Hara as Victor's mom and dad. Winona Ryder voices a girl who's staying with her uncle the mayor, who lives next door to Victor and frets about dogs that trample his flowers.

Burton knows how to create visual magic, and he's proven himself adept at playing with pop culture in ways that are clever and sometimes darkly funny. In this case, he's recycling the conceits of 1930s Frankenstein movies, right down to the bolts in Sparky's neck. They're used to attract the electric current that brings the poor pooch back to life.

My only real complaint about Frankenweenie involves its ending. For a time, I thought that Burton was going to have some fun and then show us how a child can come to grips with a devastating loss, but the movie's ending cops out on a difficult truth and keeps Frankenweenie from saying something that really could have been helpful to kids.

Parents should know that kids who have a less offbeat sense of humor than Burton may find the movie a bit disturbing. I appreciated the stylishness of Frankenweenie, and give Burton credit for being interested in the kind of antique horror that can seem almost quaint -- at least in these days of graphically splashed violence and gore.

If I really were going to push another point, I might say that it's past time for Burton to stop trying to reanimate the playthings he finds in his pop-cultural toy chest. But I'll leave that for another day.