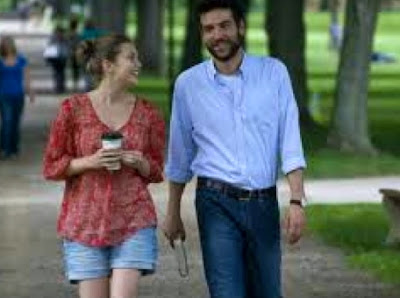 Jesse (Josh Radner), an admissions officer for a New York city college, is 35-years-old and perhaps a trifle bored with his life. Zibby (Elizabeth Olsen), a student at a Ohio university, is 19 and full of vigor. Jesse returns to that Ohio school -- his alma mater -- to honor a retiring English teacher (Richard Jenkins), a man he considered his mentor. Immersed in the hopeful environment of his youth, Jesse soon finds himself attracted to Zibby, who's bright, attractive and unusually comfortable with herself for a teen-ager. Written and directed by Radner, Liberal Arts may not graduate with honors, but it's by no means last in its class, either. Radner finds telling moments in a story that unfolds with easy-going sensitivity. An example: After retiring, Jenkins's character realizes that he's going to have a difficult time adjusting to a life of leisure. He asks the head of the English department to re-hire him, but discovers that he's already been replaced. It's not a major thrust of the story, but Jenkins shows us the pain felt by someone who's essentially surrendering his identity along with his job. Rounding out the cast are Zac Efron, as the kind of loose-canon figure who seems to turn up on every college campus, and John Magaro, as a bookish young student Jesse befriends. As Jesse wanders around his old college, he also remembers what it was like to be a student enamored of the romantic poets and awed by the teacher (Allison Janney) who taught him about them. Ultimately, Radner -- familiar from the sitcom How I Met Your Mother -- is interested in characters who are too smart to be jammed into a formula movie, but fit nicely into a low-key story that leaves you hoping everyone in it comes out unscathed.

Posted by Robert Denerstein at 3:45 PM