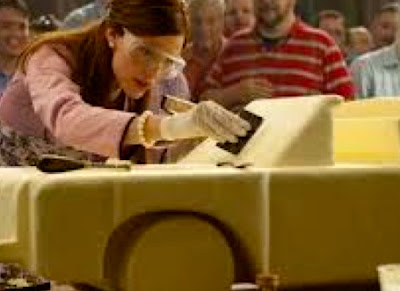 This may be a week for small movies with something to offer. Not only does Liberal Arts open in Denver, but Butter also hits area screens. Butter doesn't always spread smoothly, but it definitely whips up laughs as it tells the improbable story of Laura Pickler (Jennifer Garner), a staunchly ambitious housewife who tries to replace her husband (Ty Burrell) as Iowa's butter-sculpting champion. Her husband Bob -- whose masterpiece was a life-sized butter sculpture of The Last Supper -- held the title for 15 years. The picture opens with the contest organizers asking the unbeatable Bob to retire so that someone else can have a shot at glory. Amiable Bob agrees, but Laura wants to keep the title in the family and decides to enter the race. First-time director Jim Field Smith -- working from a screenplay by Jason A. Micallef -- contrives to have Garner's Laura Pickler square off against an adorable and wise 10-year-old black girl (Yara Shahidi) who has been put into the care of foster parents played by Rob Corddry and Alicia Silverstone. Olivia Wilde turns up as stripper whose pole dancing awakens Bob's libido. Field's approach ranges from satire to straight-forward comedy, the latter finding representation in the work of Hugh Jackman in a small role as the owner of a car dealership who assists Laura in her devious ways. Garner, Shahidi and Corddry are responsible for the movie's high points -- of which there are more than a few. Put another way, Butter isn't fat with revelations, but it's blessed with a strong cast, and the movie's satirical sense gives it plenty of sharp edges, some of which cut it and some of which don't.