Sex, sweat and lots of humidity 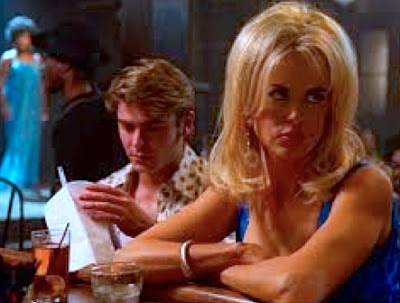 Director Lee Daniels's new movie The Paperboy, an adaptation of a 1995 Peter Dexter novel, sweats its way through a densely packed and lurid story that can seem both pungent and preposterous -= not to mention a trifle repellent.


What did Daniels have in mind? A wallow in southern-fried sleaze? A story about misapplied justice? A display of weird sexual tension? An opportunity for Zac Efron to spend time lolling about in his underwear?

Daniels, who co-wrote the screenplay with Dexter, dips into a vat full of Southern Gothic ingredients and scoops them onto the screen without straining them through the filter of a carefully developed narrative. What you get are large, often indigestible hunks of movie. The Paperboy is all gristle.

Daniels laces the humid Florida air with several narrative threads. A crusading journalist (Matthew McConaughey) tries to free a convict (John Cusack) who may have been wrongly convicted of murdering a sadistic sheriff. A slatternly woman (Nicole Kidman) corresponds with the convict, believing she has found a soul mate. The journalist's younger brother (Efron) falls for Kidman's Charlotte Bless, seeing himself as her protector.

The actors in The Paperboy are drenched in so much humidity that the movie can feel as it's taking place in a swamp. Of course, some of it does take place in swampy Florida backwaters. The time: 1969.

Efron's Jack Jansen, Ward's brother, lives with his father (Scott Glenn) and stepmother (Nealla Gordon). Jack takes advice from the family maid (Macy Gray), a woman who seems to have supplied him with the only form of maternal love he has known. Add a few Oedipal overtones, stir gently and you've got the relationships between Jack and Gray's character.

Gray's Anita Chester narrates the film, but her guidance doesn't help Daniels to keep the narrative from confusion, particularly in the early going when the movie's who's-who list has yet to sort itself out.

In another scene, Kidman's character urinates on Efron's Jack, apparently to relieve a severe allergic reaction to a jellyfish sting.

For Cusack, The Paperboy marks a stretch; maybe he has a future playing crude men with IQs that seem to dip below the scorching Florida temperatures. He's convincingly raw and frightening.

Daniels always seems to be pushing too hard, and, as he showed in Precious, he often carries things too far. Let's just say that there have been kinder views of McConaughey than the one that shows his naked posterior in a motel room.

But wait: There's more. When Ward and Jack visit a swamp-dwelling miscreant in search of evidence that might help liberate Cusack's character, we watch as the man slices open an alligator and lets its innards fall to the dirt. Oh well, at least Daniels didn't ask anyone to eat the slimy entrails.

If you're looking for something something febrile, the finale of The Paperboy won't disappoint. The same goes for much of the movie's beginning and its middle.

The actors are all game and committed, but Daniels too often leaves them wallowing in this sty of a story. Watching The Paperboy can be like watching someone drown in a bucket of sweat.


Posted by Robert Denerstein at 4:34 PM