One psychopath too many?

A movie that criticizes itself as it goes along, but is most notable for its wild performances. 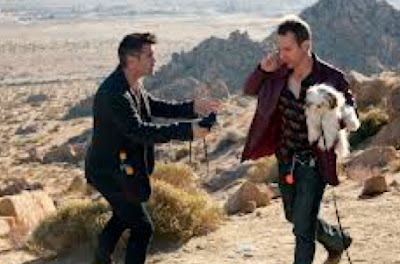 Generally speaking, one psychopath should be enough for any movie. That rule, however, doesn't apply if you're writer/director Martin McDonagh (In Bruges) and you're determined to make movie devoted to the principle that nothing succeeds like excess.

To say that Seven Psychopaths is over-plotted misses the point because the point is a ton of over-plotting that propels a large cast of characters through one wild scenario after another.

To keep the movie percolating, McDonagh has hired an ace cast of oddball actors: Colin Farrell, Sam Rockwell, Woody Harrelson and Christopher Walken, all of whom have plenty of offbeat credibility.

The result is a Los Angeles-based movie that hums along, dropping in stories within stories, tying them all together in scenes that take place in the desert and find the characters debating over how to conduct a proper gun battle.

Farrell plays Marty, a screenwriter who has a title for movie -- Seven Psychopaths -- but no story to go with it. His pal Billy (Rockwell) seems to know a good deal about psychopathy and offers to help.

As it turns out, Billy runs a dog-stealing racket with his buddy Hans (Walken), a strangely philosophical fellow whose wife (Linda Bright Clay) has been hospitalized for cancer.

Harrelson enters the story as a mobster whose dog -- a Shih Tzu named Bonny -- has been stolen by Billy.

The screenplay makes room for appearances by Harry Dean Stanton (as a Quaker who's trying to avenge his daughter's death); Long Nguyen (as a Vietcong veteran seeking revenge for the May Lai massacre), and Tom Waits (as a guy who -- along with his girlfriend -- played by Amanda Warren -- sets out to eliminate as many serial killers as possible). Did I mention that Waits appears in almost all of his scenes carrying a bunny?

True to its hip nature, the movie contains dollops of self-criticism. At one point, Hans complains about the the way women tend to be shortchanged in these kinds of movies. Too bad he's right because one of these women is Abbie Cornish, who plays the girlfriend who junks Marty early in the film. Gabourey Sidibe (familiar from Precious) has a cameo as a woman Harrelson's character tries to blame for losing his dog.

For once, it's not Walken who gives the movie's most outrageous performance. That honor goes to Rockwell, who's playing a wacked-out guy with enough lose screws to fill ten trash pails. That's not to say that Waken doesn't quietly walk off with his share of scenes, probably because he's smart enough not to try to out-wacko Rockwell.

Seven Psychopaths is fun -- until it isn't, and it requires a high tolerance for self-conscious writing, for performances that try a bit too hard to be outlandish and for the kind of movie-mad post-modernism that makes its hipness as difficult to ignore as a loud tie.