Bleed for This tells a powerful story -- but doesn't always do it with distinction. 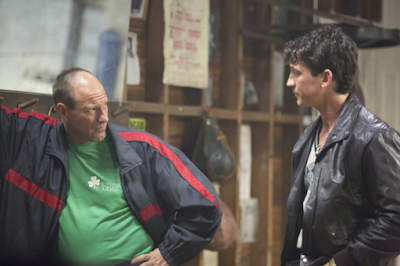 Boxing movies long have been a staple in Hollywood's repertoire with Martin Scorsese's Raging Bull still topping most lists of big-screen punch-outs.

Bleed for This, the story of Vinny Pazienza's amazing career in and out of the ring, stands as a medium grade, often dreary look at a man who sustained what should have been a career-ending, spinal-cord injury.

Instead of going down for the count after a devastating car wreck, Pazienza returned to win the middleweight title. His feat has been dubbed the greatest comeback in boxing history.

The minute you sit down to watch Bleed for This, which stars Miles Teller as the Rhode Island-bred "PazManian Devil," you know that the movie will end with videos showing the real man. Fair to say, surprise isn't the movie's strong suit.

In the hands of director Ben Younger (Boiler Room), Bleed for This revels in the working-class atmosphere that spawned Pazienza. The film takes place in a rough-and-tumble Italian American milieu with numerous scenes of Pazienza's family gathered around the dining room table, their Rhode Island accents thick enough to float in Narragansett Bay.

Younger offers a straightforward -- if condensed -- account of Pazienza's career, which certainly qualifies as a wonder of sorts.

After his injury, Pazienza was told he'd never fight again. Ignoring the diagnosis, he began training soon after his release from the hospital, an activity made more difficult by the halo that had been screwed into Pazienza's skull to hold his neck in place.

Hinds's performance has a kind of scowling rigidity that never entirely convinced me, but the movie tries to make its dramatic weight with a scene in which Hinds's Angelo Pazienza wonders whether he hasn't pushed his son too hard, and is, therefore, partly responsible for Vinny's plight.

Pazienza's relationship with Rooney doesn't have much by way of psychological subtext. The alcoholic Rooney helped Pazienza establish his career by encouraging him to move up two weight classes. Later, Rooney helped prepare Pazienza for a comeback that seemed impossible to everyone but the fallen fighter.

Teller doesn't have the physical bulk of the real fighter, but he gives the movie his all and the fight scenes are mostly convincing -- if cinematically routine.

Younger does a better job showing the physical pain involved in Pazienza's retraining. The most difficult scene to watch is one in which a doctor removes four screws from Pazienza's skull and drops them into a waiting receptacle. After three months, the halo was replaced by a neck brace.

Because the movie mostly celebrates Pazienza's determination, it doesn't waste much time counterpunching; i.e., considering the idea that a man who can't see any other role in life but that of a fighter might be tragically limited.

Pazienza's story obviously makes a strong subject for a movie, but Younger and company can't bring the movie to total victory -- either as a Rockyesque source of inspiration or as a Raging Bull-influenced hunk of tormented realism.