An amusing appointment with 'Doctor Strange' 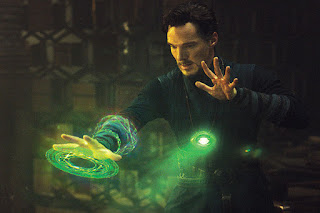 Like many of you, I've grown weary of movies derived from Marvel Comics. So when a choice presented itself last week -- see Dr. Strange, another movie from the Marvel machine, or Moonlight, a much-praised movie that lit up the fall festival circuit -- I chose Moonlight. I was, however, pleasantly surprised when, on a weekend catch-up mission, I saw Doctor Strange. Sporting an American accent, Benedict Cumberbatch plays the title character, an ultra-rational neurosurgeon who learns to submerge his ego by mastering the mystical ways of the East -- or least Marvel's idea of what such ways might be. Initially, Strange heads eastward in hopes of restoring damage done to his precious hands in a devastating automobile accident. In Kathmandu, Tilda Swinton's Ancient One gradually initiates Strange into the mysteries of her universe -- with help from her sidekick Chiwetel Ejiofor's Mordo. Cumberbatch nails Strange's arrogance and makes the doctor's transition to a superhero credible. An appealing Rachel McAdams signs on as a former colleague and love interest of Dr. Strange, and Mads Mikkelsen plays Kaecilius, the villain of the piece. The plot is mushy Marvel pap, but the fun of director Scott Derrickson's movie has less to do with story than with the special-effects show that Derrickson puts on: Inception-like inward collapses of buildings, odd intersections of reality and alternate realities, and Dr. Strange's cape, which seems to have a mind of its own. Just as important, the movie has a sense of playfulness that makes Dr. Strange feel reasonably fresh -- at least until the obligatory epilogue that comes at the conclusion of the end credits. So three cheers for Derrickson and his crew. They've defeated a ton of preposterous dialogue and a plot that could have encouraged indifference to create an enjoyable comic book movie.