Despite high style and self-conscious stabs at meaning, this one leaves a bad aftertaste. 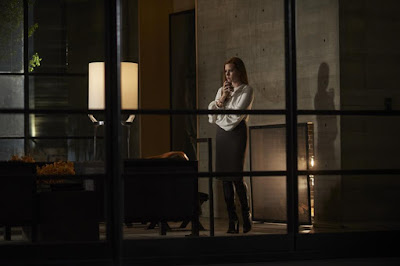 Director Tom Ford's Nocturnal Animals mixes the self-consciously stylish look of art-house cinema (or what some think of as art house cinema) with the substance of a trashy noir thriller. To borrow from the recent presidential campaign, the movie can be viewed as an attempt to go low and high at the same time.

The bulk of Ford's movie centers on Susan (Amy Adams), a Los Angeles art gallery owner who spends most of this overly determined effort either reading or remembering -- and doing very little actual living.

The movie begins with a piece of performance art at Susan's purportedly sophisticated gallery. Wearing only majorette hats and boots, some very heavy women are seen dancing. The piece demands that we look at bodies that normally would remain hidden.

Whether Ford intends this fleshy romp as ironic commentary about the hollowness of the current art scene remains unclear. Maybe it's a bit of visual snark about Hollywood's tyranny of thinness. Your guess is as good as mine.

The most vivid part of the movie involves Ford's presentation of the brutal, exploitative story that Susan spends most of the movie reading.

This story within a story begins when Susan receives a manuscript from her ex-husband (Jake Gyllenhaal), a novelist she hasn't seen since she upended their marriage 19 years earlier.

Dedicated to her, the book tells the story of a West Texas incident in which a hapless husband (also Gyllenhaal), a wife and their teen-age daughter (Isla Fisher and Ellie Bamber) are harassed by redneck creeps on a lonely Texas highway. Mother and daughter don't fare well.

This part of the story eventually becomes a revenge tale in which Gyllenhaal's character joins forces with a local lawman (Michael Shannon) whose rasping cough turns out to be a case of terminal lung cancer.

Shannon's Bobby Andes urges the aggrieved husband toward vengeance, as the movie prattles on about whether Gyllenhaal's character has the stomach for taking matters into his own hands. Is he weak or is he a real man?

Other scenes immerse us in Susan's meaning-challenged life, an existence steeped in self-loathing -- albeit in upscale surroundings of a kind few of us ever actually encounter. Oh, how the rich do suffer.

Susan lives with her philandering second husband (Armie Hammer), a businessman who's going through a slump. He conveniently leaves LA for a trip to New York, which makes it possible for Susan to spend most of the movie reading in bed.

Ford's layered approach to narrative also charts the course of Susan's first marriage: Susan wants a life her aspiring novelist husband can't provide, thus proving that her mother (Laura Linney in cameo) was right to suggest that she find a stronger mate.

Shannon gives the movie's best performance, proving that he can be scary even when he's on the right side of the law.

Trapped in a purposeless world of art and glitz, Susan doesn't provide Adams with enough opportunity to vary her performance, and Gyllenhaal does what he can with dual roles, sweating through bouts of grief and existential desperation.

Ford (A Single Man) piles on the style as he traces noir gestures in the air, leaving little but a sour aftertaste as the movie dissolves into a muddled and disconcerting ether.