This prequel to the Harry Potter series isn't as fantastic as one might have hoped. 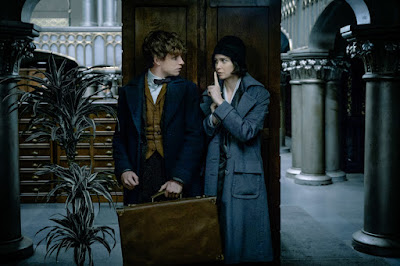 The box-office numbers for Fantastic Beasts and Where to Find Them probably will be big. If ever there was a time when the country was primed for fantasy, this is it.

Wait. I take that back. When it comes to movies, our escape-hungry country always seems primed for fantasy.

So here comes J.K. Rowling of Harry Potter fame to hook us into another series of movies designed to transport us into a world of wands and wizards.

Rowling's new series -- yes, two more are in the offing -- takes place in 1926, long before Harry Potter was even born -- much less learning his trade at Hogwarts.

This prequel to the Harry Potter series follows the adventures of Newt Scamander, a wizard who's writing what will become one of Hogwarts standard texts.

Early on, Scamander heads to the US as part of his plan to save and preserve magical creatures of which you will see many.

Fantastic Beasts, which stars Eddie Redmayne as Scamander, is rich in set design and special effects. The movie's faux but nonetheless impressive atmospherics evoke the sooty streets of Manhattan during the 1920s.

But Beasts is poor, perhaps even impoverished, when it comes to character development and propulsive storytelling.

For some, the movie's visual abundance will be sufficient reward. Strip away a strong dose of Potter affection, though, and what you're left with is a big, muddled movie in which Redmayne shuffles his way toward the next two movies.

Redmayne imbues the main character with a diffidence that makes you wonder whether the actor -- despite tousled hair and just the right look -- was fully able to connect with an ill-defined role.

As one expects, Rowling fills the screenplay with jargon. The American version of Muggles, for example, are called No-Majs (no magics), sadly deficient humans who simply get on with their lives.

Despite the movie's wizardly bias against normal folks, Scamander is open to keeping human company; he even acquires a human sidekick (Dan Folger), a portly, good-natured factory worker and aspiring baker who becomes involved in the story through a baggage mix-up.

The rest of the cast includes Katharine Waterston, as Tina Goldstein, a wizard who's on the outs with the American magic establishments; Alison Sudol as Tina's sister Queenie, a strawberry blond who reads minds; Colin Farrell) as Percival Graves, an American wizard whose motives are obviously suspect.

Have I mentioned Credence (Ezra Miller), a mope of a young man who as been adopted by Mary Lou and who skulks his way through the movie?

Part Dickensian tale about a cruel woman who adopts children for her own purposes, part cartoonish display of creatures too numerous to count and part guide to the way the magical world functions on US shores, Fantastic Beasts struck me as an often charmless addition to the Rowling oeuvre. She wrote the screenplay.

Some of the creatures -- a kleptomaniacal Niffler that looks like a platypus and a reedy Bowtruckle that Scamander keeps in his jacket pocket -- provide fun, perhaps to mitigate the impact the movie's scarier creatures might have on younger children.

Absent the built-in affection that helped carry the Harry Potter movies past their rough spots, Fantastic Beasts ultimately must stand on its own.

Sequels will follow. Let's hope that they're more engaging than this over-stuffed first edition. Consuming it, left me with a bad case of fantasy indigestion.