Getting close to natural life 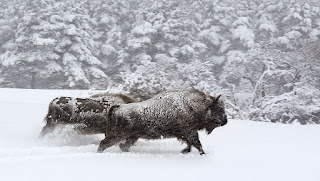 In the documentary Seasons, directors Jacques Perrin and Jacques Cluzaud cast an amazing spell. Perrin and Cluzaud (Winged Migration) capture images of animals in their increasingly threatened habitats; they begin their story by introducing us to the way animals lived in prehistoric times and move forward to the present. The occasional appearance of humans -- in various stages of development -- proves a distraction, but Perrin and Cluzaud must have wanted to underscore their theme: Human encroachment on Europe's forests has not been without devastating consequences for the continent's wild life. Although we occasionally hear a narration (in French with English subtitles), the film is at its best when offering extreme close-ups of animals doing what they do -- which involves a lot of fighting, hunting and eating. Watching a pack of wolves bring down a wild boar and then fight among themselves for its meat adds brutal realism, although the directors aren't above using the cuteness of baby wolves and foxes to elicit sympathy. Perrin and Cluzaud -- who spent four years filming in Poland, Norway, Romania, Scotland and Holland -- create drama by peppering their film with mini-narratives, a predatory cat chasing a fawn, for example. In bringing us close to the animals of the forest, Seasons employs stunning photography to remind us that we might be living in a better world if we spent more time considering the fate of the planet's non-human inhabitants.