Does anyone here speak alien?

Arrival ponders how to speak with beings from another world.. 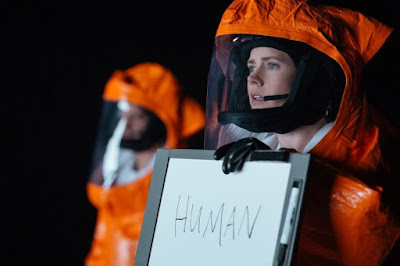 Arrival has the courage to be a sci-fi movie about the mind-bending effects of language, a heady theme presented with a welcome avoidance of apocalyptic special-effects.

The movie's main character is a linguist who finds herself in the middle of a frantic effort to understand the language of aliens who have parked 12 oval-shaped, 1,500-foot high vehicles on various portions of the globe.

Taken from author Ted Chiang's Story of Your Life, Arrival ponders the idea that language dominates perception. Fair enough, but what if we were encountering aliens? How would we grasp their written language if it were conveyed in odd looking symbols that resembled a cross between Christmas wreaths and an unidentified form of insect life?

Amy Adams plays Dr. Louise Banks, the academic charged with solving this puzzle. When we meet Dr. Banks, she's mired in grief for a daughter who recently died of cancer.

On what seems to be a normal morning, Dr. Banks arrives at her class only to find it almost empty. It quickly becomes apparent that Dr. Banks's students -- like everyone else on the planet -- have become transfixed by the arrival of alien crafts, a boon to the 24/7 news cycle, as if it needed one in the age of Trump.

An army colonel (Forest Whitaker) soon shows up to enlist Dr. Banks's help in talking to the aliens. The major question: Why have they arrived?

Dr. Banks insists that she can't tell anything from the colonel's recording of alien sounds; she needs direct contact with the aliens if she's to make sense of their language.

Director Denis Villeneuve (Sicario, Incendies) makes any number of smart choices, the most important of which involves early exposure to the aliens, octopus-like creatures referred to by earthlings as heptapods. Villeneuve seems less interested in how creatures from other worlds might look than in how we might talk to them.

To begin her work, Dr. Banks -- and others -- enter the craft and approach the aliens, who remain behind a transparent barrier. To reach the aliens, the anxious earthlings must walk through the vessel's tunnel-like approach where gravity goes topsy turvy. Eventually, the aliens emerge from a smokey haze.

Effects aside, the movie depends heavily on Adams performance and on Villeneuve's willingness to avoid overstatement.

Adams gives Dr. Banks a sense of reserve that makes it clear that she's on a two-fold journey -- one having to do with communicating with the aliens; the other relating to coming to terms with grief. Accepting life means also accepting that all lives must end.

Dr. Banks works with a theoretical physicist (a subdued Jeremy Renner). Renner doesn't have much to do aside from occasionally asking Dr. Banks whether she's holding up under the strain of it all.

Jenner's Ian Donnelly doesn't know that Dr. Banks is having what are presented as unsettling flashbacks to moments she shared with her daughter; Villeneuve smartly hides the meaning of those flashbacks until the movie's intellectually trippy ending, which involves the way language influences our perception of time.

Simultaneously spectral and down-to-earth, Arrival casts a hypnotic spell, but that doesn't mean it achieves perfection.

In case the arrival of aliens on Earth weren't enough for one movie, the screenplay by Eric Heisserer adds a drearily familiar clash between scientists and the military.

A Chinese General (Tzi Ma) grows weary of trying to talk to the aliens and issues an ultimatum. Either leave in 24 hours or be attacked.

Can Dr. Banks discover the key to alien intentions before General Shang destroys the possibility for communication? Will the movie's resident CIA agent (Michael Stuhlbarg) stop Dr. Banks from finding a peaceful resolution to the conflict?

At its best, Arrival does what only movies can accomplish; it transports us into a reality that feels strange, unfamiliar and urgently important.

But it also can deflate such feelings with plot elements that undermine the movie's interest in the nature of time, the power of language and the gap between intellectual knowledge and emotional realization.

Still, those elements are there, and they make Arrival sci-fi with a difference: It's at least trying to be smart.