A dog's search for meaning

A Dog's Purpose arrives amid controversy. The movie? It's no better than OK. 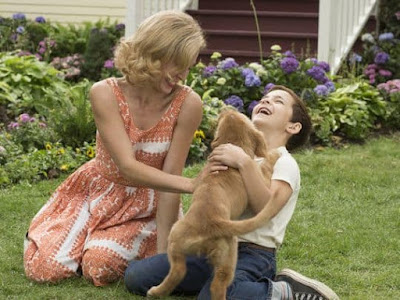 The other day, a friend told me that she had been looking forward to A Dog's Purpose as a welcome diversion from the cares of the day, which -- need I remind you -- are getting "yuger" by the minute. But she also had read that TMZ had shown a video in which a German shepherd resisted leaping into a water tank during filming. People for the Ethical Treatment of Animals called for a boycott.

According to USA Today, the film's director, Lasse Hallstrom, called for an investigation. Producer Gavin Polone said he had reviewed the raw footage from that day and insisted that the TMZ release was misleading.

Obviously, I have no idea which side to take, but I have to admit that as a dog lover, any suggestion of the mistreatment of animals puts me on edge, and I certainly thought about the accusations when watching a scene in which a German shepherd, working as a police dog, leaps into swirling waters to save a girl who had been kidnapped.

Off-screen controversy aside, the movie -- based on a novel by W. Bruce Cameron -- deals with a dog who's reincarnated multiple times. The dog, who narrates the film, retains the same consciousness as it moves from life to life, each time re-emerging as a new species of canine. Of course, that means that the dogs die, a process shot through gauzy, milk-white images that lead to the reappearance of an eager puppy.

To say that A Dog's Purpose steps into large piles of sentiment would be an understatement, but it's also true that the movie tries to temper its warm, huggy feeling with attempts at realism. A father in one episode turns out to be an abusive alcoholic, the shepherd's policeman owner is a lonely man who must watch his dog die from a gunshot wound, and a low-life owner abandons his incarnation of the dog near a railroad track.

The dog -- voiced by Josh Gad -- first appears as Bailey, a golden retriever puppy who's rescued by a boy named Ethan (Bryce Gheisar). Ethan's mom (Juliet Rylance) lobbies for Ethan to keep Bailey over the objections of the boy's dad (Luke Kirby).

Boy and dog bond in the movie's longest episode, as the story follows young Ethan to high school where he's played by K.J. Apa. The teen-aged Ethan also acquires a girlfriend (Britt Robertson) who quickly becomes part of what Bailey calls his "pack."

An aging Bailey ultimately must be put down in a vet's office before reincarnating as a female working in the Chicago Police Department. John Ortiz portrays the cop who takes the dog -- now named Ellie -- under wing.

We next meet the dog as Tino, a Corgi adopted by a female student (Kirby Howell-Baptiste) who doesn't have much by way of a social life.

The dogs' many lives conclude with the appearance of Buddy, an Australian Shepherd/St. Bernard Mix who finds his way to the farm operated by the new-grown Ethan (Dennis Quaid). Buddy decides that it's his job to reunite Ethan with the now grown Hannah (Peggy Lipton).

The Swedish-born Hallstrom (Hachi, A Dog's Tale, Chocolat and The Cider House Rules) uses period music to let us know that the story is advancing from the '50s to the present. He includes some shots from the point of view of the movie's various dogs, and milks the emotional scenes for tears.

Because of some of its darker twists, I'm not sure about the age-appropriateness of the movie, which clearly is aimed at a family audience. And, yes, the dogs are cute and expressive in the way only dogs can be.

So what about a dog's purpose? In his various lives, our doggy narrator keeps wondering about the purpose of his life. Unable to enroll in a philosophy course or experience a religious epiphany, our reincarnated canine eventually concludes that his purpose is a simple one: Rather than posing unanswerable questions, he should simply "be here now."

It's not depicted, but can we assume that somewhere along the line, the dog has read Ram Dass? If you don't get the reference, you missed the '70s, and it's too late to go back.