He has personalities to spare 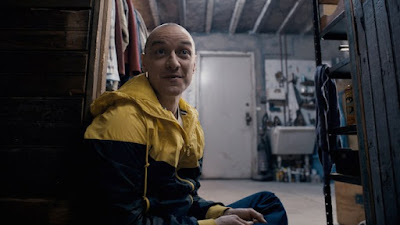 First things first. Apart from The Sixth Sense, I'm not much of an M. Night Shyamalan fan. Having said that, I also have to say that Shyamalan's latest qualifies as a better-than-average horror/thriller, a movie that at its best, exhibits a nightmarish intensity.

McAvoy acts out a variety of his character's 23 different personalities -- all set around a situation in which McAvoy's Kevin abducts three high-school girls and holds them as prisoners. Kevin declares his hostages "sacred food," and, in one guise or another, administers to them or scares the daylights out of them.

The kick of the movie involves the way these young women (Jessica Sula, Haley Lu Richardson and Anya Taylor-Joy) discover Kevin's various personalities, which include a nine-year-old boy named Hedwig, a prissy schoolmarmish woman and a guy who seems to regard himself as the caretaker of Kevin's underground domain. The precise location of Kevin's lair is part of the movie's mystery.

When Kevin meets with his mostly sympathetic psychiatrist (Betty Buckley), he usually appears as Barry, a flamboyant fashion designer. Buckley's character carries the burden of expanding the movie's reach. Her character believes that those suffering with D.I.D. may hold the key to a dimly understood form of human transformation.

Of the young women, only Taylor-Joy's Casey receives much by way of background; her story -- seen in flashback -- involves horrific experiences with an uncle who helped turn her into a dejected outsider.

None of this is to say that Split doesn't have exploitative elements: The girls all wear short skirts and sometimes less, the movie's climactic scenes probably push a little too hard and not all of Split proves credible.

Still, McAvoy, with shaved head and predatory grin, approaches his perverse task with obvious relish, and Shyamalan whips up plenty of tension -- even in the face of some predictable twists and turns.

January, of course, isn't known as prime territory for quality movies, but Split is creepy enough to satisfy the folks who like this sort of thing.

Stick around for the epilogue that begins during the end credits. It contains a surprise.