Looking for gold in Indonesia

Matthew McConaughey headlines in a story about a major gold strike. 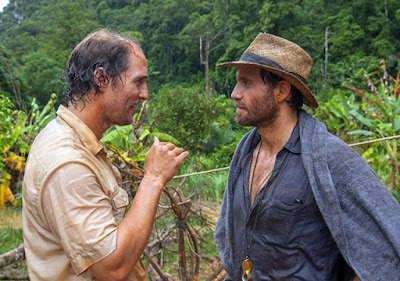 In the new movie The Founder, Michael Keaton reveals the character and personal drives of Ray Kroc, the businessman who turned McDonald's into a national phenomenon. Keaton gets to the core of the character without trying to physically transform himself into Kroc. In the new movie Gold, Matthew McConaughey takes a totally different tack, turning himself into a balding, paunchy warthog of a man who seeks to enrich himself with what's purported to be the world's biggest gold find.

I start here because I'm always a little suspicious of extreme physical transformations, mostly because they threaten to call as much attention to the transformation as to performance.

Gold begins by telling us that it was inspired by real events. I've read the movie was based on the Bre-X scandal. Bre-X, a Canadian group, in the 1990s reported that it had made a major gold find in Indonesia. I can't tell you the rest without revealing important plot points in Gold.

Know, though, that McConaughey's Kenny Wells is a fictitious character who joins forces with another character, Michael Acosta (Edgar Ramirez), a geologist with a theory about where Indonesian gold can be found. Son of a successful businessman who specialized in looking for ore, Kenny wants to prove that he's as adept at prospecting as his old-school father.

McConaughey has given the character his all, which earns some respect, but the movie bogs down in familiar turf when Wells and Acosta take their story to Wall Street; predictably, the trappings of wealth dazzle Kenny, threatening his relationship with his loyal girlfriend, a convincing Bryce Dallas Howard.

Before striking gold, Kenny hits bottom; his dad's company -- Washoe Mining -- teeters on the edge of bankruptcy. A bereft Kenny travels to Indonesia in hopes that he can persuade Acosta to help him find the gold deposits that remain undiscovered.

Say this: McConaughey conveys the sheer joy Kenny experiences when he gains a foothold in the world of high finance. He woos an investment banker (Corey Stoll) and outsmarts a South African competitor (Bruce Greenwood). As if adhering to formula, Kenny's head is turned by a sophisticated woman (Rachael Taylor) from the world of finance.

Director Stephan Gaghan, who wrote and directed Syriana, keeps the movie moving -- even with a narration supplied by McConaughey, whose obviously speaking after the fact.

Hopscotching from Indonesia, where Kenny becomes deathly ill with malaria, to Reno and Wall Street, the movie offers visual diversity, and has fun with scenes in which Kenny allies himself with Indonesian leader Suharto's debauched billionaire son, although a bit in which Kenny must confront a tiger to prove his courage goes beyond far-fetched.

A major twist can't be revealed here, but Gold never quite strikes the vein for which it surely was digging. We've seen far too many stories about unbridled greed, ambition and dreams for Gold to register as much more than a showcase for McConaughey's transformative powers.

That transformation -- which required a weight gain of 40 pounds -- makes it difficult not to be aware that McConaughey willingly presents himself as the antithesis of the suave figure he plays in commercials for Lincoln.

It's a feat, I suppose, an actor who's like a runner who only knows how to sprint, but it's not enough to save a movie whose familiarity makes it feel as if much relevance has been lost.