Heroism on a bad day in Boston

Mark Wahlberg and Peter Berg reunite for a look at the Boston Marathon bombing. 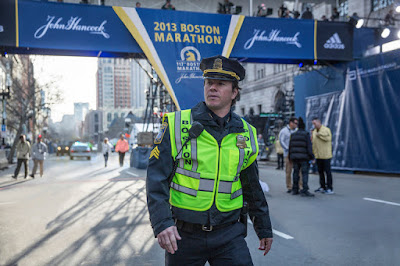 Patriots Day reunites director Peter Berg with actor Mark Wahlberg for a look at the horrible April day during which the 2013 Boston Marathon was disrupted by terrorist bombings.

Berg, who directed Wahlberg in Lone Survivor and Deepwater Horizon, approaches the story from two mostly compatible directions: On one hand, he's writing an ode to the city of Boston. He's celebrating the strength and good will of the city's ordinary residents. He supplements that ode to Boston with a police procedural about the frantic search to find the two bombers, who fled the scene of their foul handiwork.

Tense and well-edited, Patriots Day focuses mainly on a slightly disaffected Boston sergeant (Wahlberg) who, at the picture's opening, receives a kind of punishment assignment: He must serve in uniform at the finish line of the marathon, a job he regards as the equivalent of penance. He refers to his uniform -- not usually part of his detective's garb -- as a "clown suit."

Naturally, Wahlberg's Tommy Saunders gets more than he bargained for when a couple of bombs, planted in pressure cookers, turn a day of celebration into a day of bloodshed and grief.

In this case, Wahlberg portrays a character whose personal struggles really don't amount to much; Tommy grumbles about drawing uniformed duty, but he's basically a good-natured policeman who loves his city and his wife (Michelle Monaghan). Wahlberg certainly knows this character, and inhabits him with ease.

We also meet a variety of other characters. Kevin Bacon plays the FBI agent heading the hunt for the bombers from a Boston warehouse; John Goodman portrays the city's police commissioner.

We also meet a young couple (Rachel Brosnahan and Christopher O'Shea) who become victims of the bombers, as does an MIT security guard (Jake Picking) and a young Chinese app designer (Jimmy O. Yang), whose car is hijacked by the bombers while they're on the run.

Khandi Alexander has a brief, but entirely compelling, scene as the woman who interrogates the wife of one of the bombers (Melissa Benoist). Why Alexander doesn't find work in more movies remains a mystery to me. She's terrific here.

Meanwhile, J.K. Simmons suffers from no such shortage of exposure; here, he portrays a Watertown police sergeant who winds up with one of the bombers hiding in a boat in a Watertown driveway.

Themo Melikidze and Alex Wolff portray the two brothers who carried out this monstrous act, setting off a tidal wave of heartbreak in what should have been a day of pure excitement.

Berg focuses on the chaos and impromptu heroism that arose along with the professionalism that it took to keep the situation under control.

If you're looking for nuance, it's probably best to look elsewhere. Patriots Day offers straightforward storytelling with an emphasis on down-to-earth patriotism.

But the real point here, I think, is to salute the working people of Boston as the heart and soul of a badly wounded city. Put another way, you might summarize the whole of Patriots Day by noting that Berg seems to be bringing us one simple message: "This is what we mean by Boston Strong."