Race, not space, the final frontier

A little-known story about the black women who helped make the space program fly. 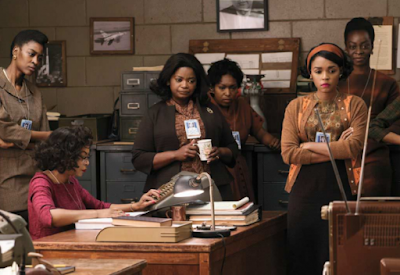 The old adage constantly seems to be proven wrong. What we don't know usually does hurt us -- or at least makes us intellectually and spiritually poorer.

Consider that while watching Hidden Figures, a movie about the little-known role played by a group of black women in the space program during the 1960s. Director Theodore Melfi deals with a story that has remained as hidden from most Americans as the women who inspired it.

Melfi delineates the racism experienced by black women employed by NASA in a pre-computer world in which humans did the necessary calculations for space missions, confirming the trajectories of rockets, for example. The sophisticated mathematical work conducted by these women was an essential part of NASA's operations.

Henson's Katherine Johnson receives the most attention. Johnson, a math whiz, is selected to leave the anonymity of the computation squad and work with the big boys in NASA's Space Task Group during a variety of important missions. Hell, in those days, all the missions seemed important.

Spencer's Dorothy Vaughan quickly realizes that computers eventually would replace the humans who did the calculating. So she learned about computers, and made her charges learn about them, as well. As a result, the women of the black computation pool were fully prepared to continue working when NASA began automating things that previously were done by hand.

It's interesting to recall a time when computers were room-sized; the one purchased by NASA didn't fit through the door to the room where it eventually was housed.

Finally, Monae's Mary Jackson pursues her ambitions by making the transition to a full-fledged engineer, a route that required defiance of Virginia norms in segregated education.

Melfi (St. Vincent) brings upbeat energy to his adaptation of Margot Lee Shatterly's book Hidden Figures: The Untold Story of the African American Women Who Helped Win the Space Race. The movie's star trio is more than equal to the task of showing us the inequities these women faced and the determination it took to overcome them.

We're talking about a time when bathrooms for the races were separate, when educated white engineers had difficulty believing black women possibly could be their equals, and when segregation was so ingrained that Johnson's white co-workers insisted that she drink from her own coffee pot.

Kirsten Dunst portrays an aloof supervisor who refuses to acknowledge that Spencer's Vaughan is doing the work of a supervisor -- work that Dunst's character couldn't begin to tackle. Still, Vaughn receives no extra pay.

Kevin Costner plays the gruff but understanding white guy who focuses on the mission to the exclusion of everything else, including race. Costner's Al Harrison insists that Johnson advance in the hierarchy by joining the Space Task Group. Johnson's skills in analytic geometry are better than anyone else's in the group, he realizes. End of story.

Jim Parsons takes the role of the opposition, a white engineer who has no interest in seeing black women enter a domain previously reserved for white men.

Too few of us know the story of these women, so Hidden Figures instantly qualifies as a revelation. Beyond that Henson, Spencer and Monae are playing women who succeed for reasons that most movie characters -- men and women included -- seldom do: They're smart.

For a movie about math wizards, the story is pretty much told by the numbers, but a talented cast gives Hidden Figures enough freshness to overcome its formulaic moments.

Besides, it's worth remembering that while sophisticated scientists and engineers were trying to reach the stars, social conditions at home didn't always reflect an equal amount of intelligence and daring.