A gangster epic that falls short 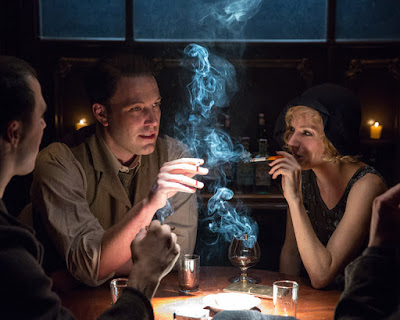 In Live By Night -- Affleck's second adaptation of a novel by author Dennis Lahane after 2007's Gone Baby Gone -- the director broadens his reach with a gangster story that begins with crime in Boston and moves to Prohibition rum-running in Florida.

But once Live By Night leaves Boston for Tampa, Fla., the movie goes South, as well, losing both focus and authenticity. Put another way, Live By Night represents a step backward from Affleck's work in both The Town and in Argo.

In look and in scope, Live by Night qualifies as a big, rambling gangster movie with Affleck at its center. Affleck plays Joe Coughlin, an ordinary guy who returned from World War I determined never to be bossed around again. As a result, Joe becomes an outlaw, probably not the occupation his police official father (Brendan Gleeson) had in mind for his son.

Joe quickly gets crosswise with Albert White (Robert Glenister), the head of the Boston's Irish mob. How could it be otherwise? Joe has been carrying on an affair with one of the mobster's mistresses (Sienna Miller). Joe's in love with Miller's Emma Gould. Let's just say she's more pragmatic about the relationship.

After a stint in jail, Joe winds up in Tampa where he takes over the rum-running business for the head of the Boston Italian mob, one Maso Pescatore (Remo Girone). Joe has two ambitions: to support himself and to avenge himself on Albert White, who also has moved to Florida.

Back in Boston, White not only nearly beat Joe to death; he also took out his rage on Emma.

Joe's romantic life moves on when he falls for the sister of a Cuban rum runner (Zoe Salanda). His crime dealings also put him in contact with the local sheriff (Chris Cooper), a man who claims to be incorruptible but who ignores the criminals who thrive in his midst, as well as the local chapter of the KKK, which is lead by a sneering sadist named RD Pruitt (Matthew Maher).

In all matters violent, Joe receives help from his pal Dion (a bulked up Chris Messina).

If all this weren't enough, an additional subplot introduces the sheriff's daughter (Elle Fanning), a young woman who's corrupted before turning to evangelism.

Affleck loads up on gangster glamor, vintage cars and a variety of locations that create the impression that the movie wants to enter the big-time gangster pantheon.

Affleck also doesn't skimp on gun play and harsh violence, which he punctuates with double-barreled blasts of portentous dialogue about fate, justice and the way things tend to come back to haunt a person in unexpected ways.

As Joe, Affleck appears in nearly every frame, but this is one of his more subdued performances, maybe because he's also overseeing the logistics of a large-scale production with a big cast and tons of atmosphere, much of it confined to a crime-riddled section of Tampa during the 1930s.

Intermittently intriguing, Live by Night doesn't pack the intended wallop. Its ideas seem to grow artificially from a story that badly needed paring down. In the end, Live By Night feels more like a well-appointed imitation of a gangster epic rather than the real thing.