A look at women of the last century

Annette Bening occupies the center of a rich, anecdotal movie. 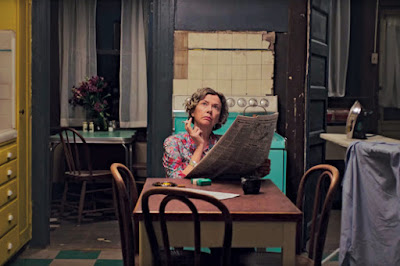 The house in Santa Barbara, Ca., constantly is being renovated. Its owner, a 55-year-old woman with a teen-age son, rents out rooms. The tenants include a mechanic who's a little long in the tooth to be called a hippie, a young woman recovering from cervical cancer, and a teen-age girl who occasionally slips into the house to sleep with the owner's son. By this I mean, she actually sleeps with the owner's son, forcing the boy to subdue his raging hormones as she looks for a safe place from her sometimes promiscuous exploits.

If you were around during the 70s, this all may have a vaguely familiar ring -- loosey-goosey social arrangements that approximate the intricacies of family: a single parent who often find herself at a loss when it comes to child rearing, sexual exploration and an overall sense of being too harried to search for deeper meaning.

Dad? He's not in the picture, having left for New York to start a new life.

That's the environment that director Mike Mills creates for 20th Century Women, a movie that manages to create a feeling for how life felt in 1979.

Normally, that might seem too narrow a gauge to hold our interest, but Mills has made a movie dominated by the shambling flow of the jangled lives of the women who populate it.

The result is rich, funny and warm -- although about three-quarters of the way through you may find yourself wondering whether Mills will be able to bring all these ingredients to some sort of a boil.

If that never happens, there are plenty of compensatory moments along the way: When the car of the owner of the house catches fire in a parking lot, she responds by inviting the firemen to dinner. And when her son points out that this is not exactly a normal response, she can't understand why her behavior might be considered odd.

Annette Bening gives the movie's anchor performance as Dorothea, a cigarette-smoking mother who winds up parenting a teen-age son (Lucas Jade Zumann) rather late in life. Unsure how to handle the young man, Dorothea seeks help from her cancer-conquering tenant (Greta Gerwig) and from Julie (Elle Fanning), the girl who becomes a near-constant visitor.

Supposedly based on Mills's own upbringing, 20th Century Women benefits from the actresses who grace it. Playing an aspiring photographer, Gerwig brings a mixture of confusion and vivaciousness to the movie, and Fanning perfectly captures the incipient world-weariness of a young woman whose sexual behavior has out-paced her emotional ability to deal with it. Fanning's character is a mass of contradictions; she's exploring her womanhood before even leaving the backpack stage.

Needless to say Dorothea's experiment doesn't entirely work. After Jamie goes clubbing with Gerwig's character, Dorothea wistfully muses that she'll never see that side of her son, a teen-ager trying to negotiate a separate social world for himself.

It's possible that the other actresses were inspired by the gifted Bening, whose Dorothea presides over the house, tries to maintain her composure and allow her son a degree of freedom he hasn't really sought.

In his best role in a long time, Billy Crudup plays a mechanic, the man in the house who tires to keep his poise. He, too, seems to be stuck in an emotional limbo.

Finding his way proves difficult for young Jamie, whose life is guided by three formidable but sometimes floundering women. We're told the story through Jamie's eyes.

Enjoyable in pieces -- and I don't mean that as a slam -- 20th Century Women makes a simple request: It asks us to spend some time with these appealing characters. They engage us in a series of gestures and responses that, like life itself, can charm, amuse and confound.