The Shape of Water, a romantic fantasy about a cleaner and a "monster.'' 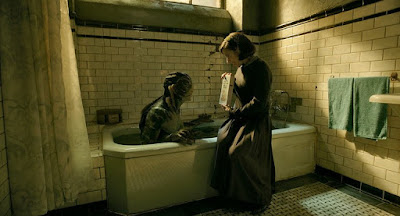 Guillermo del Toro chases dreams, attempting (and often succeeding) in mixing horror and romanticism as he allows his ample imagination to invade reality. In his great 2006 movie, Pan's Labyrinth, del Toro produced a dark fantasy about Franco's Spain. Now in The Shape of Water, del Toro turns to American shores, for a fairy tale about the love between a mute woman (Sally Hawkins) and a creature who has been brought from the depths of the Amazon to the US by government officials who see him as a threat.

The second half of del Toro's conception -- the part involving an attempt by a government agent (Michael Shannon) to destroy the creature -- might be the weakest part of the movie, flirting with cliches about the way officialdom inevitably becomes the enemy of beauty and mystery.

But this creature is different. Called Amphibian Man in the credits (Doug Jones under a ton of make-up), the creature has the physique of a man but also has scales and the ability to be fierce when threatened. In the Amazon, natives thought Amphibian Man was a god. Rather than trying to trample his strangeness, they elevated it.

Perhaps never quite as poetic as its wonderful title, The Shape of Water nonetheless allows del Toro to give full vent to an imagination into which movies flow, cinematic tributaries that fuel his sense of invention. It's not coincidental that Hawkins' Elisa lives above a theater called the Orpheum where The Story of Ruth is playing or that her neighbor (a gay artist played by Richard Jenkins) obsessively watches old movies, preferring them to the news of the day.

Set in Baltimore during the 1960s, the movie alternates between two major locations: Elisa's apartment and her place of employment, a government installation where Amphibian man is being held prisoner.

Elisa and her co-worker (a down-to-earth Octavia Spencer) learn that the creature is being tormented by Shannon's character. An authoritarian jerk, Shannon's Strickland becomes the real monster, a self-justifying sadist disguised as a "normal" man. Shannon's Strickland lives in suburbia, indulges himself by buying a Cadillac and pounds away (literally) during sex with his mildly libidinous wife.

Michael Stuhlbarg makes an appearance as a scientist who wants to preserve the creature. He believes that it would be a crime to destroy Amphibian Man. Stuhlbarg's Bob has a double identity. It's not much of a spoiler to tell you that Bob is also a Russian spy and that the Russians have their eye on this creature. They, too, would like to harness its powers.

Hawkins excels in her performance as a silent woman who gradually reveals her strengths. From the beginning, del Toro establishes Elisa's affinity for water. For Elisa, water and sexuality are intimately connected. And, yes, Elisa not only has a romantic interest in the creature; she has sex with him. She explains to Spencer's curious Zelda how this union is possible in one of the movie's giggly joking moments.

Del Toro delivers on the promise of the title. There's a lot of water in The Shape of Water, arriving in the form of flooded rooms, downpours and the tank in which Amphibian Man languishes. Water is life and, as such, can't always be contained.

The movie's romanticism extends to its elements that in the 1960s might have been considered "subversive," a woman who can't speak, a gay man, and a black woman. It falls to these outsiders to appreciate Amphibian Man in all his scaly glory. It is only in union with Amphibian Man that Elisa finds her true identity. She's finally complete.

Those familiar with del Toro's work won't be surprised at the movie's visual mastery, greatly aided by the cinematography of Dan Lausten and the production design of Paul D. Austerberry; they help the movie live in a world all its own.

The Shape of Water doesn't quite reach the magical heights at which del Toro must have been aiming, but it stands as a work in which sweet and sour tones bump against one another with del Toro insisting that only in the full embrace of those we deem alien do we find our deepest humanity -- or maybe he's just telling a small story about a woman who deserves more than life has given her.

Either way, The Shape of Water brims with strange charm.