After a clever start, the pleasures of Downsizing begin to shrink. 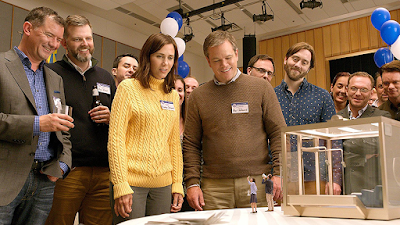 Let's get the movie's premise out of the way. Downsizing, director Alexander Payne's latest semi-satirical effort, imagines a world in which it's possible to shrink people to a height of five inches. Why would anyone submit to such diminishment? Because those who shrink can buy their way into the good life with very little money. Small people help society, too. They can consume all they want without devouring obscene amounts of the world's dwindling resources.

The first hour of director Alexander Payne's Downsizing has been made with cleverness and nicely executed effects, but what starts as an imaginative and amusing look at the ways in which a scientific "advance" can be commercialized eventually degenerates into a morality lesson for the main character who must be schooled in the ways of life and love.

Payne begins in bravura fashion when we meet Dr. Jorgen Asbjornsen (Rolf Lassgard), the inventor of downsizing. I won't spoil the reveals of these early scenes, but they give Payne an opportunity to play with scale in ways that surprise and amuse. Lassgard's Asbjornsen is a true believer: He thinks downsizing can solve the world's ecological problems.

The story then shifts its focus, introducing us to Matt Damon's Paul, a disaffected occupational therapist whose ambitions have been thwarted. Paul's wife Audrey (Kristin Wiig) wants to move into a better house, but Paul can't afford to pay for Audrey's dreams. As a result, Paul and Audrey are stuck living the drab life in the Omaha house Paul inherited from his late mother.

The idea of "downsizing" begins to take on more appeal for Paul and Audrey when they meet a downsized couple (Jason Sudeikis and Maribeth Monroe) at a school reunion. Sudeikis' Dave sings the praises of Leisureland. The residents of Leisureland may be small but their happiness is expansive, in part because they've left all their financial worries behind.

Once Paul and Audrey decide to downsize, the movie hints at a conflict that threatens to lift the story out of the thematically limited sphere of middle-class self-satisfaction that Payne so easily skewers.

At a bar after their pre-downsizing party, a drunk sneers at Paul and Audrey. Why should small people receive the same social benefits as large people? After all, small people contribute so much less to the economy. Aren't they ciphers?

Despite the tongue lashing, Paul and Audrey proceed to the downsizing station: Scenes at the reduction center are well executed and funny in a dry way: Payne treats this amazing process in a matter-of-fact fashion.

But Payne, who co-wrote the screenplay with Jim Taylor, has more in mind than a looming clash between resentful big folks and happy little people. He enlarges the movie by raising the stakes to say something even bigger and, in so doing, allows the movie to deflate.

The movie takes a turn away from itself with the introduction of some new characters: Christoph Waltz) portrays Dusan, an escapee from Eastern Europe, who seems savvy about life in Leisureland. Waltz's Dusan and his pal Joris (Udo Kier) are party animals who devote themselves to sensual pleasure and shady entrepreneurial efforts. Dusan's credo: Tomorrow be damned. Party on.

After one of Dusan's epic parties -- at which Paul samples his first hallucinatory drugs -- Paul meets one of the Vietnamese women (Hong Chau) who arrives with a crew to clean up the previous evening's mess.

Hong's Ngoc Lan Tran was transported from Vietnam to Leisureland against her will, something to do with her role as a staunch dissident. A shabby prosthetic device has replaced the leg Lan Tran lost during her ordeal. For a hot minute, Lan Tran was a political celebrity in Leisureland. Now, she runs a cleaning crew.

It's just here that the movie loses steam. Lan Tran introduces Paul (and us) to the Third World aspects of Leisureland, impoverished people who are even further removed from life's luxuries than Paul. Leisureland, we learn, has slums and some of its residents die for a lack of medical care.

Much is made of Paul's last name. He's Paul Safranek. No one seems to be able to say Safranek without mangling it, a running bit that suggests Paul's inability to establish himself in the world. Paul ultimately affirms his identity through exposure to those less fortunate than himself, folks who seem to be either Latino or Asian.

Speaking in a clipped style, Hong Chau becomes a jarring voice in the midst of Leisureland's soothing prosperity. Hong's expressiveness and determination in the face of her character's limited language skills can't quite overcome the stereotypical nature of the character she's playing.

As the movie progresses, Payne tries to deal with environmental catastrophe and the kind of love that's expressed by caring for others, turning the self-serving delusions of Leisureland on their head.

I guess that Payne wanted to transcend satire and find something human, but in the attempt, the movie loses touch with its resourcefulness. It becomes ... well ... downsized.