Not the greatest movie musical

The Greatest Showman feels like a generic version of a big-screen musical. 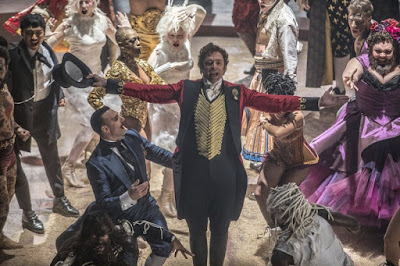 A musical about P.T. Barnum -- a man whose name has become synonymous with all-American hucksterism -- might be a welcome addition to the current moment of hyperbole and rant. But The Greatest Showman, which stars Hugh Jackman as Barnum, isn't that movie.

Torn between mild criticism of Barnum's ability to sell anything and a view of Barnum as a champion of those who are different (he invented the circus sideshow), The Great Showman lands a middling blow.

Director Michael Gracey, an Australian who thus far has done lots of work in commercials, turns out a generic musical that features lots of bubbly music from a quartet of songwriters that include two lyricists from La La Land (Benj Pasik and Justin Paul). I never thought the music in La La Land reached knock-out levels; the same goes for the music in The Greatest Showman, which feels like a musical that has been engineered to hit all the appropriate notes -- from buoyancy to lyricism to foot-stomping rigor.

But the calculation is impossible to ignore as we learn the story of Barnum, a man from the wrong side of the tracks who married upward. Michelle Williams portrays Charity Barnum, a character who doesn't allow her affluent upbringing to stand in the way of her unwavering support for Barnum, a lower-class striver who wants to prove that he can give Charity the kind of life her snooty family regards as her birthright.

As the story develops, Barnum opens a circus/museum in New York City. He acquires a variety of acts -- from the diminutive Tom Thumb (Sam Humphrey) to a bearded lady (Keala Settle) with a robust singing voice.

The movie also shows how Barnum develops a relationship with the more artistically oriented Phillip Carlyle (Zac Efron). Barnum persuades Carlyle to join his circus as an investor and partner. Carlyle quickly falls for a trapeze artist named Anne (Zendaya), but class strictures and the racial prejudice of his family limit Carlyle's willingness to acknowledge his feelings publicly.

Once he establishes himself as a circus impresario, Barnum decides that he needs to class-up his act: he brings Swedish songstress Jenny Lind (Rebecca Ferguson) (a.k.a., the Swedish Nightingale) to the states for a series of concerts that make a ton of money.

Tempted by an opportunity to elevate his status, Barnum turns his back on the unusual people who helped him become rich. He devotes all his time to Lind, wrecks his marriage and eventually sees his fortunes reduced to nothing.

Will he come back? Does the circus have three rings?

Of course, Barnum eventually transcends his vanity and again becomes a champion for the purity of family love and for those society sees as "different," all of which plays like the hooey that Barnum tried to sell to the rude and scoffing multitudes of his day.

Jackman knows how to occupy the center of a musical and does so with verve, style and unflagging command. Efron holds his own as a sidekick. Williams and Ferguson, along with Zendaya, give the movie some welcome female presence.

The retro 1800s production design keeps pace with the performances, but a ton of effort and expense can't elevate The Greatest Showman to the upper levels of the movie musical pantheon. It's gaudy, overproduced and, for the most part, more committed to spectacle and shine than anything of lasting worth.