Aaron Sorkin makes his directorial debut with Molly's Game, a movie that features some winning hands from a somewhat limited subject. 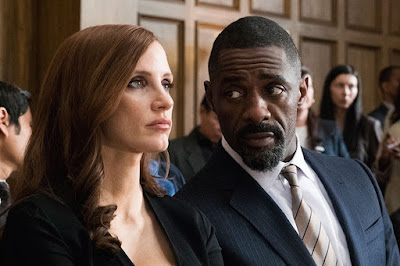 When I was browsing the internet looking for information on the real Molly Bloom, I came across a review of Bloom's book, which serves as the basis for writer Aaron Sorkin's eagerly awaited directorial debut.

A website devoted to books about poker featured a headline that suggested that the book struggled to find both an audience and a point.

I'm not sure that Sorkin's adaptation of Bloom's book, Molly's Game, will have trouble finding an audience, but it does have a bit of difficulty finding a larger point. Bloom's journey took her from an Olympic caliber skier to a woman who made a ton of money running high-stakes poker games before running afoul of the law.

In real life, Bloom's LA-based game attracted players such as Ben Affleck and Tobey Maguire. She evidently operated legally until she began taking a cut of the biggest pots. Such "raking" is illegal and evidently changes friendly games (even when played for ridiculously large stakes) into crimes.

Don't get me wrong. Molly's Game can be entertaining, and it features an energized performance from Jessica Chastain as Bloom, a woman whose brother Jeremy Bloom became both an Olympian and an NFL player.

Molly Bloom was on a similar Olympic track until a freak accident derailed her career. At loose ends, she headed to LA where she eventually moved from a gofer at high-stakes card games to an impresario of such big-money affairs.

Perhaps taking a cue from Bloom's book, Sorkin has Molly narrate the movie, a dialogue-heavy plunge into her point of view that, at times, makes it feel as if Molly's reading us the movie.

As much as any writer, Sorkin has a way of making it seem as if he's in the know about whatever subject he tackles. He floods the screen with poker jargon and makes sure that every actor speaks with the kind of rapidity that marked the great screwball comedies of yesteryear. The result can be dizzying, skilled actors engaging in tricky verbal workouts.

Idris Elba adds weight as Molly's attorney. Watching Elba and Chastain bat words over the metaphorical net that separates their characters creates a pleasure all its own.

Bloom's story moves from Los Angeles to New York City, unfolding in episodic fashion, almost as if Sorkin drops little short stories into the larger mix. This approach highlights the work of a strong supporting cast.

Jeremy Strong portrays Molly's first LA boss, a character who makes no attempt to be anything less than obnoxious. Michael Cera does good work as an arrogant player with skills; Bill Camp does a terrific job as a skilled player who swan-dives into a terrible losing streak, and Chris O'Dowd impresses as a dim-witted drunk who works off a gambling debt by bringing some troubling folks into one of Molly's New York games, figures from the Russian mob.

Kevin Costner has one of the movie's best small roles. He plays Molly's authoritarian father, a philandering psychology professor who presides over a flock of high-achieving offspring.

Up to a point, Sorkin benefits from the lavish surroundings that Molly created for those who gambled at her table: drinks, fine food, fancy hotel rooms and beautiful women to wait on both winners and losers.

Earlier, I mentioned that the movie might have difficulty making a point. By the end, it seems as if Sorkin wants to hold Molly out as an example of female achievement. She used her wits to create a small empire and honorably refuses to supply the FBI with the names of those who sat at her table. Public exposure might have ruined lives and destroyed families.

Pretty noble for someone who knows she made a small fortune serving the gambling addictions and fantasies of men who were willing to throw money at her in the form of out-sized tips.

I was entertained by much of Molly's Game, which -- at 140 minutes in length -- probably runs 20 minutes longer than necessary: Sorkin turns cards over with enough flair and snap to keep his movie watchable, but, in its entirety, the movie doesn't make the case for why Bloom's story is more than a sketch in a bigger picture that remains unpainted.