She copes with hard times in Kinshasa 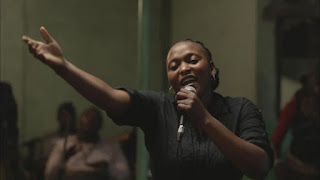 You think you're going through a rough patch. Consider the fate of Felicite, a woman living amid the corruptions of the Democratic Republic of Congo. Felicite, the title character of Alain Gomis's latest movie, must raise money so that her son can have his broken leg surgically repaired. Felicite also has been robbed by a person posing as a do-gooder and, to add aggravation to insult, her refrigerator is perpetually broken. To fully appreciate Felicite, the movie about this beleaguered but defiant woman, you need tolerance for hand-held camera work, but the technique makes sense because Felicite lives in a chaotic world. Felicite (Vero Tshanda Beya Mputu) sings at a local nightclub and proves a force with which to be reckoned, a woman of ample girth who meets trouble head-on when she learns her 14-year-old son, Samo (Gaetan Claudia), has been taken to the hospital. As she tries to gather money for the boy's surgery (the doctor won't operate without a substantial down payment), Felicite takes us on a journey that brings her into contact with a variety of people from whom she hopes to raise money. She also strikes up a relationship with Tabu (Papi Mpaki), a boozer who spends a lot of time trying to repair Felicite's refrigerator. Gomis obtains a fine performance from his lead actress, a singer in her first acting outing. We also are shown glimpses of the Kinshasa Symphony Orchestra playing in interludes that provide a stark contrast with the rough-and-tumble life of the city's nightclubs and streets. In all, Felicite strikes a powerful chord, taking us into a society in which every reward feels hard won. The language (Lingala and French with subtitles) also has a distinctive quality. At one point, Felicite tells Tabu that she likes his way of being in the world. It's not the only expression in Felicite that opens the eye while pleasing the ear.