He made the world's worst film

James Franco directs a comedy about the making of The Room, an awful movie about a comedy that has developed a cult following. 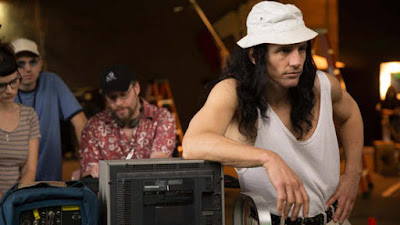 All through the preview screening of The Disaster Artist, I found myself looking for James Franco's face, a strange preoccupation because Franco's in nearly every frame of the movie. We catch glimpses of what we know as Franco's face but he's mostly unrecognizable as Tommy Wiseau, a wannabe film director who made The Room, a movie so awful it has acquired cult status among those who enjoy unadulterated badness.

Often shown at midnight, The Room probably is best appreciated in the company of audiences who feel liberated to hoot and holler at the screen. In real life, Wiseau frequently attends screenings of his movie, which has been called the worst movie ever made.

I don't know if The Disaster Artist will rock your world, but I do know that I laughed at the comic touches that Franco, who also directed, brings to the subject of dismal failure.

As is the case with most good comedies, Franco and his fellow actors play things straight. Wiseau had no idea that he was making a bad movie; in fact, he seems to have had a wholehearted belief in the quality and importance of his effort.

In dead-on fashion, Franco replicates scenes from The Room as the production is being filmed. He also replicates Wiseau's shoulder-length hair and odd manner of speaking; his accent has a marble-mouthed, eastern European flavor. Wiseau says he's from New Orleans.

Given the outrageousness of the subject, there's no need for Franco to veer from straightforward narration in a screenplay that has been adapted from a book written by Greg Sestero, another wannabe actor who traveled to Hollywood with Wiseau to pursue fame, fortune and a career in movies.

Sestero (Dave Franco) met Wiseau in 1968 when both were attending a San Francisco acting class. Sestero saw Tommy do a balls-to-the-wall, completely insane version of a Stanley Kowalski speech from A Streetcar Named Desire. He was impressed by Tommy's willingness to go "raw."

No one knows where Wiseau got the money to support himself and Sestero in LA or how he financed a movie that he believed would put him on the map. A deluded Wiseau also says that his work has a Shakespearean quality, a comparison that, to say the least, represents a stretch.

The Room, the picture Wiseau's making, centers on Johnny (played by Wiseau) and includes some ridiculous sex scenes which Franco shows us as he chronicles the shooting of the movie with an actress (Ari Gaynor), a script supervisor (Seth Rogen) and a small crew.

Jacki Weaver appears as one of the film's actresses, a woman who claims that even a day on the set of the world's worst movie beats a day of longing to act.

It's impossible to make a movie like The Disaster Artist without a bit of condescension toward the movie's woeful cast of characters. We laugh at them precisely because it's so obvious that Wiseau's project is doomed from the start. Nothing would (or could) redeem it.

Franco fully immerses in Tommy's life, presenting it with the same cockeyed seriousness with which Wiseau seems to have lived it. Wiseau released The Room in 2003 and claimed that he always intended it to be funny.

I'm not sure what Wiseau really had in mind, but unlike a lot of other would-be comedies, Franco's rendition of this real-life story actually is funny.

Watching Wiseau try to throw a football, for example, presents a moment so void of athleticism, it's close to astonishing. And that's the whole joke in a nutshell. From the outset, it's clear that nothing about The Room will succeed, yet -- to the amazement of everyone involved -- Wiseau persists.

And, no, you don't have to have seen The Room to go along for this enjoyably nutty ride.