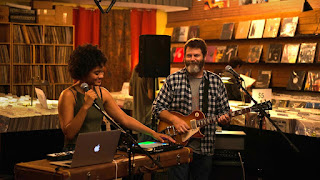 Heart Beats Loud is one of those laid-back movies that isn't out to oversell you on anything. Set in the Red Hook section of Brooklyn, the movie tells the story of a father and daughter who make music together. The twist: The daughter (an appealing Kiersey Clemons) has ambitions that go beyond music. She's about to start college and wants to be a doctor. Dad (a relaxed but sometimes dour Nick Offerman) thinks the two should try to pursue a musical career together, particularly because Clemons' Sam has an obviously potent talent. But it’s Offerman's Frank who dreams of striking musical gold. A hit record could liberate him from the failing, vinyl-only record store over which he presides. He'd like to make music, not sell it. The songs -- pleasing enough -- are interrupted by whispers of a plot involving Offerman’s character’s mom (Blythe Danner); his landlady (Toni Collette) and his bartender friend (Ted Danson). A romance between Clemons' character and a young woman played by American Honey's Sasha Lane doesn't add much, but the movie is relaxed enough to accommodate a bit of meandering. Offerman has a sly way of commanding the screen, avoiding any of the ingratiating gestures that would have turned Frank into an off-beat role model. Director Brett Haley (I'll See You in My Dreams) may not dig deep, but his movie wanders into summer buoyed by the odd couple chemistry of a father who may have more growing up to do than his brightly ambitious daughter.