Grown men playing tag? They chase one another but have trouble catching laughs. 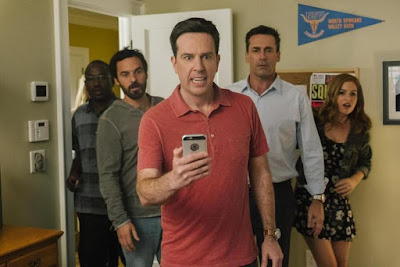 In 2013, The Wall Street Journal ran a diverting little article about a group of men from Spokane, Wash., who managed to stay in touch over decades by playing an annual, month-long game of tag.

Tag, a game that requires no equipment and which relies on speed and elusiveness, isn’t usually thought of as a competitive sport. But this group of long-time pals turned it into one — at least for four weeks a year. They drew up a contract specifying the rules of a game they played with stealth, subterfuge, cunning and an abiding commitment not to be the last man tagged, a status with which one of them had to live for an entire year before the game resumed.

Enter Hollywood and the idea that this amusing piffle of a story would make a good movie.

And it might have had director Jeff Tomsic displayed more interest in exploring the absurd side of male competitive drive, had he and his cohorts done a better job of getting the cast on the same page and had they not turned Tag into a movie that feels like a lukewarm bit of filler sandwiched between summer blockbusters.

The filmmakers seem to have made self-conscious attempts to alter the movie’s gender muscle flexing by having the wife (Isla Fisher) of one of the players (Ed Helms) accompany her husband as the game he plays the game. Moreover, the movie's Wall Street Journal reporter serves little purpose other than to make room for Annabelle Wallis, the actress who plays her.

Not that any of the male characters are particularly well-developed, either.

Helms portrays Hoagie, a man who suggests to another player -- a successful insurance company executive played by Jon Hamm -- that they team up to take down the reigning champion (Jeremy Renner). During the course of several decades, Renner's Jerry never has been tagged. As portrayed here, Jerry has ninja-like skills that are heightened by some quick editing, the sudden insertion of slo-mo trickery and an inexplicable ability to disappear.

Other players include a Denver-based stoner (Jake Johnson), a character who's introduced with a bong joke that would have seemed dated -- even had it turned up 50 years ago. Hannibal Buress signs on as a slightly nerdy gameplayer.

To keep the movie focused, the filmmakers assemble the players in Spokane, where Jerry is about to be married. Jerry hasn’t invited his buddies to the wedding because he knows they’ll show up anyway, using the nuptials as a long-awaited opportunity to bring down the champion.

Setting most of the movie in the players' hometown also gives the filmmakers an opportunity to throw in a bit of competition for an old high-school flame (Rashida Jones), a woman who attracts attention from both Hamm and Johnson’s characters.

All of this generates minimal chemistry. Granted the men are locked in fierce competition, but they seldom seem comfortable with one another, and Hamm, in particular, looks like a misfit addition to a misbegotten group that produces no stand-outs, except possibly for Fisher, who can be more underhanded than any of the male players. By rule, women are excluded from the game.

Renner does a convincing job as Jerry, but his intensely focused performance seems to belong in another movie.

Because the men are not playing in the confined space of a schoolyard but in the real world, they're forced to don lame disguises to sneak up one another or to engage in trickery, bribery and other forms of deceit that will allow them to approach their prey.

I went back and read the original Wall Street Journal article and a couple of follow-ups, all of which were more interesting than the resultant movie which can’t find its rhythm as a robust comedy with outlandish flourishes, including a far-fetched (and not especially funny) bit of action set in a wooded area.

The tag catchphrase — “you’re it" — might have given the movie stinging sharpness, but after laying out its premise, this over-amped effort does little to catch us unaware — and that includes a last-minute revelation that may have been added to create a bit of emotion without having done anything to earn it.