Josh Brolin and Benicio del Toro reunite in Sicario: Day of the Soldado 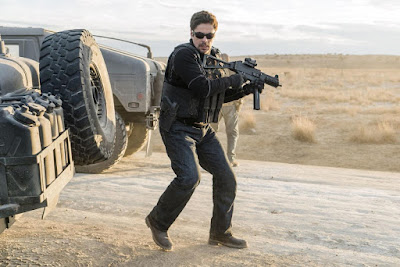 The first few minutes of Sicario: Day of the Soldado conflate Mexican border crossings with acts of Islamic terror in the US. The picture wasn't five minutes old before I found myself wondering whether Stephen Miller, considered the hardest of the Trump administration’s immigration hardliners, hadn’t served as a script consultant.

But this sequel to 2015's Sicario eventually broadens its outlook to encompass a kind of inclusive nihilism in which the US government will advance its ambitions by fomenting war, in which CIA agents fight battles in which there are no rules and in which violence, cynicism, and wavering loyalties upset any semblance of international order.

This teeming doomy pile of hopelessness should have made Soldado feel like a keen-eyed movie of the moment, yet this edition of Sicario feels oddly out of touch, a movie in which events seem to be taking place in a world divorced from all other possible realities.

From the start, Soldado accepts its brand of amoral realism without question, perhaps establishing itself as another movie that expects us to admire the way it pushes violent efficiency to harsh extremes.

This time, the story centers on the way a hard-core CIA operative (Josh Brolin) enlists the help of a professional assassin (Benicio del Toro) in trying to start a war among Mexican drug cartels, groups of ruthless mobsters that have recognized a new economic reality: People -- namely immigrants who wish to be smuggled across the border between the US and Mexico -- have become the new cocaine, an abundant source of profit.

Emily Blunt, who appeared in the first movie as a novice who picked her way through thickets of moral corruption, has been replaced by Catherine Keener, a more credible hardass but one who has been given much less to do than Blunt.

Brolin reprises his role as a CIA agent who, for the most part, operates without principles. If there’s a dirty job, Brolin’s character does it with matter-of-fact efficiency. As the movie’s assassin, del Toro manages to do what he does best, bring unexpected flavor to his line readings, sort of Christopher Walker without the impish humor. I’m not criticizing del Toro for this; for me, his quietly off-kilter performance was the best thing about the movie.

The plot contrives to have del Toro’s Alejandro escort a teenage girl (Isabela Moner) out of Mexico. The daughter of a major drug lord, Isabella's kidnapping is part of a complicated scheme to pit rival gangs against each other. It's part of an ill-defined effort to stop Islamic terrorists from joining immigrants as they cross the border.

You probably needn’t have seen the first movie to follow this one, which tries up its ante of dread with Hildur Guonadottir's monotonously ominous score, which — I imagine — is what fog horns would sound like if they were able to mourn.

I still have enough appreciation of B-movie pleasures to have enjoyed parts of Soldado, although it’s difficult to say which without spoilers.

Overall, though, Soldado takes us into dismal emotionally parched terrain where morals have been strip-mined, decency has been eroded and most values have been discarded. The movie follows characters who are accustomed to doing society’s dirty work for bureaucrats —- Matthew Modine portrays the US Secretary of Defense -- who are committed to covering their own asses no matter what their decisions may cost others.

Screenwriter Taylor Sheridan, who wrote the first movie and followed with Hell or High Water and Wind River, hasn't imagined the same movie twice but doesn't do much to expand the second helping's thematic reach. And in taking the reins from director Denis Villeneuve, Italian director Stefano Sollima has made a movie that, like many of its characters, seems to lack conviction about the corrupted world into which it pumps a fair measure of bullets.

Those who find Soldado realistic may want to consider the near-miraculous recovery made one of its characters after ... I'll say no more. Check it out for yourself and tell me if you bought it.