They're at Cannes -- but not for the films 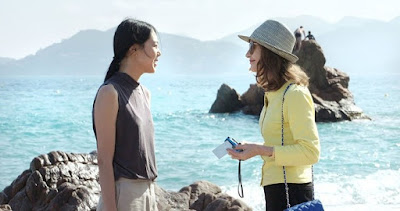 It’s arguable that South Korean director Hong Sang-soo could have written the outline for his deceptively slight new film, Claire’s Camera, on the back of a cocktail napkin. Watching the movie, which takes place during the Cannes Film Festival, you may wonder whether Hong isn’t improvising, dropping a quartet of characters onto the festival’s periphery and then sitting back to see what happens.

In one way or another, all the characters in Claire's Camera are related to the world of film. So Wan-soo (Jung Jin-young) directs films and has one playing at the festival.
Kim Mi-hee's Jeon Manhee has been working for a film sales agent (Chang Mi-hee) who fires her at the beginning of the film, claiming that she no longer trusts Man-hee to be honest with her.

Claire (Isabelle Huppert) portrays the film civilian in the group; her character teaches music but wanders about Cannes with a Polaroid camera, asking if she might snap photos of the people she meets.

In the scene in which Manhee loses her job, Hong sends a clear signal that he’s going to take a few comic shots at the idea of capturing life on film. Chang’s character asks the woman she has just fired to join her in a selfie, an absurd commemoration of a moment both characters probably should want to forget.

Having Huppert walk through the film with a camera seems a little artificial, but Claire serves as a catalyst to bring out the back stories — not necessarily presented in chronological order — that drive Hong’s slender but emotionally piquant narrative.

The movie’s Cannes setting proves relevant but never dominating. This may be Cannes, but watching great films seems pretty far down on anyone's agenda. Hong seems interested in the way his characters respond to slowly revealed truths.

Unlike some directors, Hong seems to know that he has hold of a slender premise and at 68 minutes, he doesn’t overwork it.

As for the director portrayed in the film ... Jung’s character proves as disheveled as his rumpled haircut; he's an unsympathetic mess of a man.

The same can’t be said for Claire’s Camera, a film of elusive but insinuating charms. And, no, I don’t believe anything about the movie was improvised.