When grief haunts a girl's summer 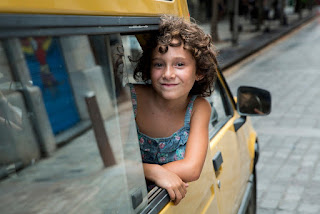 As even the world's hermits must know by now, summer is a time for big, splashy action when it comes to movies. If you're looking for an antidote, you may want to try director Carla Simon's debut movie Summer 1993. Working in autobiographical mode, Simon tells the story of six-year-old Frieda (Laia Artigas), a girl who faces a crisis when her mother dies of AIDS-related pneumonia. After her mother's death, Frieda is sent to live with her uncle (David Verdauger) and aunt (Bruna Cusi), a couple with a four-year-old daughter of their own. It's refreshing to see adults trying to deal responsibly with a troubled, obstinate child who often taxes their patience. The adults can't always hide their exasperation but they clearly have young Frieda's best interests at heart. Simon obtains entirely credible performances from the movie's children. Understandably unable to adjust to what has happened to her, Frieda is capable of flashes of cruelty. Simon deserves applause for not turning her movie into a weepy. Instead, she tells a quietly realized story about people who suddenly face a difficult situation that none of them chose. What they can choose is how they'll adapt to these circumstances. They do so with a level of humanity that's too little seen on screen.