The dinos return, but where's the fear? 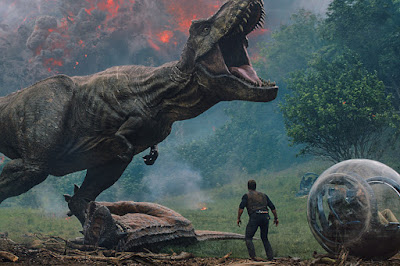 If there's any emotional heft in Jurassic World: Fallen Kingdom, it stems from the fate of the movie's genetically engineered dinosaurs. At this point in their big screen lives, these innocent creatures have come to represent a natural state that greedy humans have altered and abused. Some will get behind the wrath of the dinos, which is directed mostly at bad folks who want to profit from their revived existence (Gasp!) even turn them into the world's most deadly weapons. Had the picture been better, I might have joined them.

Director J.A. Bayona, known for his 2007 horror opus The Orphanage, limits his achievement by adhering to the required action formula. Here's a clue: The movie's dialogue relies heavily on the word "run." The fact that people need to tell one another to flee as massive thundering creatures approach at full speed stands as a greater indictment of human intelligence than anything else in this protracted stompfest.

Fallen Kingdom leans heavily on action while shortchanging build up, but I took the multiple instances in which Chris Pratt -- reprising his role as a kind of dino whisperer -- was slimed by various creatures as a welcome helping of self-mockery on the part of Bayona and his CGI crew. The movie could have used more such flippancy.

In the last Jurassic World film, Pratt teamed with Bryce Dallas Howard . The two reunite for an adventure in which a wealthy benefactor (James Cromwell) tries to save dinosaurs from imminent extinction by taking them off an island on which an active volcano is about to erupt.

Howard's Claire recruits a Pratt's Owen, who -- of course -- initially plays hard to get. He's busy building a cabin in the isolated woods and has had enough of dinosaurs. Still, he answers Claire's call.

Additions to the series include a nervous computer expert (Justice Smith) who provides some of the movie's many screams and a young woman (Daniella Pineda) who seems to function as a kind of punk veterinarian.

Of course, an evil military type also must crop up. Enter Ted Levine as Ken Wheatley, the brutally duplicitous organizer of the rescue mission. Keep your eye an assistant (Rafe Spall) to Cromwell's character, a guy who immediately becomes suspect by being too damn nice for his own good.

The movie divides its time between the island and the estate created by Cromwell's Benjamin Lockwood. Thanks to manipulations of plot that needn't be spelled out here, the dinos wind up on the estate, where they eventually race around, somewhat unexpectedly, indoors.

Lockwood's granddaughter Maisie (Isabella Sermon) joins in an effort to save the dinos from profiteers who eventually bring in an auctioneer (Toby Jones) to conduct the world's most malign rare species sale.

The dinosaurs have human allies, but the movie's heart belongs to Blue, a human-friendly velociraptor that was trained by Owen in the last movie. Unlike any of the human characters, Blue shows a degree of inner conflict: She must decide which humans to protect and which to turn into lunch.

The movie also includes a prologue and epilogue in which Jeff Goldblum, as a scientist testifying before a Senate Committee, condemns the hubris that was required to create these genetic marvels in the first place. He advises against rescuing the dinosaurs; for him, the pending volcanic eruption represents an opportunity for a reset.

Bayona can't entirely escape the trap of open-mouthed acting that often results from an extensive reliance on CGI: This involves asking actors to gawk at the special effects or scream with fear as the digitally created dinos bear their predatory teeth.

Braced by familiarity with this franchise, I seldom -- if ever -- shared the fear. We know the genre too well (and so does Bayona) to get beyond the rote deliverance of one action set piece after another as the movie stomps its way toward the ending that inevitably (and finally eerily) opens the door for the next chapter. I'm betting we'll see a lot more running, chomping and wholesale swallowing of those who trample ethical considerations in their relentless quest for profit.

What exactly these miscreants will do with all their money in a world they seem eager to destroy remains a mystery.