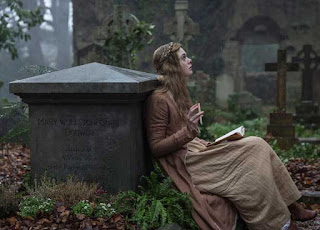 Elle Fanning does credible work as Mary Shelley, the 19th-century author of Frankenstein. But Saudi Arabian director Haifaa Al-Monsour (Wadjda) loses out by attempting to walk a fine line between a well-adorned period piece and an emotionally turbulent tale populated by Mary Shelley and two poetic geniuses. Shelley's life changed when she met Percy Bysshe Shelley (Douglas Booth). Still a teenager, Mary defied her father (Stephen Dillane) to begin a relationship with Shelley, who already had a wife and daughter. Predictably, Mary's views about fidelity came into conflict with the Romantic poet's open attitudes toward sex and free-style living. Shelley's advocacy of counter-cultural values can seem a bit forced, although a rumpled Booth does his best to convey the poet's live-for-the-moment enthusiasms. The movie moves toward a gathering at the home of Lord Byron (Tom Sturridge), another Romantic poet, as well as an insufferable cad who comes across as someone who'd get himself into deep trouble in the age of #MeToo. Aside from being insensitive to anyone else's feelings, Byron exploits Mary's gullible half-sister Claire (a spirited Bell Powley). Mary Shelley clearly delineates the prejudices faced by 19th-century women with aspirations beyond landing a husband. Al-Mansour's movie also serves to introduce Shelley to those who only know her work, many through big-screen adaptations. But Al-Monsour doesn't solve the major problem faced by those who make movies about writers: their work -- Frankenstein doesn't emerge until the movie's almost over -- usually surpasses their lives, even when lived with the kind of stress, tumult, and suffering that supposedly helped Shelley create her masterpiece.