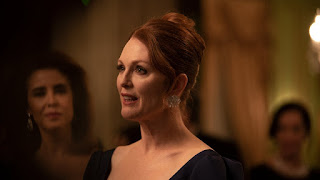 Bel Canto is a seriously intended movie that I found impossible to take seriously. Adapted from a 2001 novel by Ann Patchett, Bel Canto tells the story of a celebrated opera singer (Julianne Moore) who visits an unnamed Latin American country to give a private concert. Instead of dispensing with a quick-hit engagement, the singer winds up being held hostage -- along with her affluent audience -- by a band of guerrillas. The country's vice president arranged the concert in hopes of impressing a visiting Japanese industrialist (Ken Watanabe). Watanabe's Hosokawa, an avid opera lover, accepted the invitation even though he had no intention of building the factory for which the vice president had been angling. For its part, the invading band of guerrillas wants the country's president to release all political prisoners. Moore lip-synchs (Renee Fleming did the actual singing), and the hostages and their captors slowly begin to bond as it's revealed that the insurgents are ... well ... not all that bad. Because Hosokawa is obsessed with Moore's character's voice, the leap from the love of music to the love of the singer proves a short one. In a more unlikely romance, one of the rebels (Maria Mercedes Coroy) falls for Hosokawa's multi-lingual translator (Ryo Kase). Sebastian Koch portrays a Red Cross negotiator who's reluctantly thrown into the mix. Once everyone is trapped in the veep's luxurious home, the movie begins to suffer from a claustrophobia that director Paul Weitz can't defeat. What surely should have been tense becomes slack, a limp attempt to sing the praises of art as a means of unifying disparate (and desperate) souls. When the hostages and their captors wind up in an impromptu soccer game before the movie's violent finale, all I could think was that it takes more daring than was available here to save this movie from looking like a cross-cultural summer camp.
Posted by Robert Denerstein at 2:10 PM