She's the afterthought in his life

Jonathan Pryce and Glenn Close play husband and wife in The Wife. 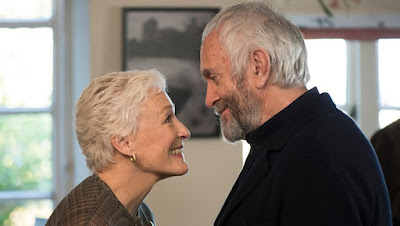 The complicated relationship between a husband and wife moves to the forefront of The Wife, Swedish director Bjorn Runge's adaptation of a 2003 novel by Meg Wolitzer. The movie centers on the Castlemans, a couple brought to convincing life by Jonathan Pryce and Glenn Close.

When the movie begins, Pryce's Joe Castleman is awaiting word on whether he has won the Nobel Prize for literature. He does and the movie then shifts to Oslo, Norway where Joe, his wife and his grown son (Max Irons) have gone to celebrate Joe's success.

Of course, that's not the end of the story, but only the beginning of a slow revelation of the secret behind Joe's literary triumph. For those unfamiliar with the story, I'll say no more except to note that Close's Joan Castleman seems to have taken responsibility for every mundane aspect of Joe's exalted life, tasks she carries out despite Joe's penchant for philandering.

As events in Oslo unfold, Runge shows us flashbacks to various stages of the couple's relationship, which began when Joe, married to someone else at the time, taught writing at the college level. Joan (played as a young woman by Close's real-life daughter Anne Starke) was one of his prize students. At the time -- the 1950s -- prospects for emerging female writers seemed dim and Joan sacrificed her talent on the altar of Joe's ego.

Importantly, the movie shows us that Joan, though definitely exploited, was complicit in her fate. For reasons of her own, she loyally subordinated herself to Joe's ambitions. No one can do such a thing without paying a price, and Joan's resentments ripple through Close's finely tuned performance.

For his part, Pryce conveys the egotism and occasional cruelty of a famous Jewish-American writer. His relationship with his son, an aspiring author, reeks of authoritarianism and neglect. Joe isn't kind when talking about his son's writing, disguising his lack of compassion as an insistence on high standards.

Strong hints of threatening disclosures run throughout the movie. Christian Slater plays a wily journalist who has been trying for years to write Joe's biography. He wants Joan to help him topple Joe from his throne, a lofty perch built on the pile of critically acclaimed books the author has published.

Despite building toward an inevitable showdown between Joe and Joan, The Wife never quite feels revelatory. But Pryce and Close add undeniable polish to this peek into literary lives -- both fulfilled and wasted.