He dares to do what seems impossible. 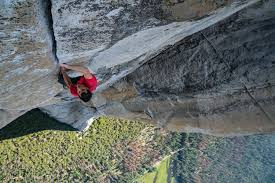 As someone who's not crazy about heights, I approached the documentary Free Solo with a mixture of dread and interest. I wanted to see if I'd be able to watch climber Alex Honnold do what never had been done before: scale Yosemite's treacherous El Capitan without a rope or any other safety equipment.

The often-riveting Free Solo makes for challenging viewing for those of us who like to keep both feet planted firmly on the ground. Qualms or no, this is one compelling film.

Honnold makes his living as a climber, but it would be ridiculous to suggest that he does it for money or fame. What motivates him is an unquenchable desire to push himself, in this case by taking on a 3,000-foot granite wall. No ropes. No gear. Just a bit of chalk to help him secure what look to be the most tenuous of spots to place his hands and feet.

Filming Honnold's climb required the filmmakers to take some risks themselves. Directors E. Chai Vasarhelyi and Jimmy Chin (Meru) faced daunting challenges: How to get the most breathtaking images of the climb while staying out Honnold's way. I've read that the filmmakers used drones, rigs and powerful zoom lenses to accomplish their task.

Chin, who sometimes appears camera, is obviously troubled by an inescapable awareness that things could go terribly wrong. Climber Tommy Caldwell arrives to help Honnold train. He's encouraging but realistic, noting that "everyone who has made free soloing a big part of their carer is dead by now."

It must have been nerve-wracking for the filmmakers to know that they were telling a story about a guy who might die during the filming.

Honnold turns out to be a man of preternatural focus: He sees no reason to give up climbing, even if his girlfriend -- Sanni McCandless -- were to ask him to quit for the sake of their relationship. She doesn't.

Despite a couple of setbacks, Honnold's determination is impressive. I'm not sure that free soloing shouldn't be recognized as a form of insanity, but Free Solo holds your attention -- for every gut-wrenching minute of Honnold's history-making effort.

These science whizzes make you excited for their future -- and ours. 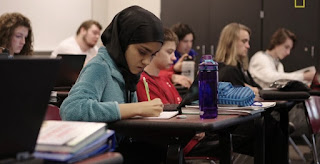 I'd be surprised if Science Fair didn't show up on this year's Oscar's documentary shortlist.

Directors Cristina Costantini and Darren Foster hit the inspirational bullseye by focusing on smart young people who are preparing to compete in 2017's International Science and Engineering Fair, an event that pits 1,700 finalists against one another as they compete for prizes in multiple categories.

The directors concentrate on young people from Kentucky, New York, South Dakota, and West Virginia, as well as from a small city in Brazil and an isolated community in rural Germany. You'll meet young men and women who boldly follow their interest in science in highly competitive academic surroundings such as Louisville's duPont Manual High School or at a school in South Dakota where there are no science labs and the sole competitor for international recognition must be sponsored by the football coach.

Kashfia, a Bangladeshi-American student who's investigating adolescent brain activity as it pertains to risk, is also a Muslim who wears a hijab. She may not be brimming with self-assurance, but the school's football coach recognizes a ferocity in her.

Dr. Serena McCalla, who teaches in Long Island, N.Y., proves a formidable adult presence, pushing her students toward excellence and refusing to accept anything less.

The individual stories all are interesting, but Science Fair deserves extra praise because its young subjects fill us with optimism for the future. I don't know if such positivity will prove entirely warranted, but damn if it didn't feel good to feel positive -- if only for the film's intriguing 90 minutes.