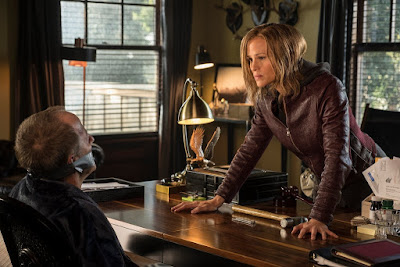 Jennifer Garner's performance proves impressively convincing as a woman with a sparkling sense of humor and an obvious concern for the welfare of her audience, a pleasant variation of the girl-next-door image that seems to have taken over the actress's career.

Unfortunately, I'm not talking about the new movie Peppermint, a revenge saga in which the actress has been cast in the kind of role that's usually slotted for men. I'm referring instead to Garner's work in a series of Capital One Venture commercials in which Garner wonders what card might be in our wallets.

In Peppermint, Garner might still be playing the girl next door, but she's the kind of girl next door who happens to have acquired the stealthy prowess of a ninja, the lethality of a serial killer and the determination of Liam Neeson when he's in full Taken mode. No surprise there because in this lurid outing, Garner is being directed by Pierre Morel, who also directed Taken.

Gratuitously violent and ultimately serving as an irresponsible endorsement of vigilantism, Peppermint can't duck criticism by claiming that its formulaic approach should be accepted as a necessary helping of female empowerment. Man or woman at pulling the trigger, it's the same old movie.

Early on, Peppermint puts its bloody cards on the table: Garner's Riley North, her husband, and her daughter are gunned down -- on her daughter's tenth birthday and at a Christmas festival no less. Talk about piling on.

Riley's husband had become the target of a drug cartel, members of which mistakenly thought he was involved in a plot to steal some of their money.

After the legal system fails Riley, the only surviving member of her family, she disappears for five years, a time on which I'm not sure the movie devotes five minutes. Riley re-emerges as a warrior who somehow has acquired the skills necessary to avenge her family's horrible demise.

Garner gives her all to a movie in which her character tortures and blows up a judge (corrupt, of course), wields a mean knife and subscribes to a theory that that raises the ante on the old saw about an eye-for-an-eye. In Riley's case, one eye seems to be worth a hundred eyes. She piles up a war-like body count.

Most of Riley's victims seem to be fierce-looking Hispanic men with enough tattoos to cover a wall. I won't say which wall, but did so many Latino people need to be blown away?

There are two ways in which a movie such as Peppermint could have succeeded. First, it could have made us complicit in Riley's hunger for revenge; i.e., it could have induced us to share the satisfaction that accrues from seeing obvious miscreants brought to justice. Peppermint doesn't offer even this pleasure, guilt-ridden as it might be.

A surer road to success has to do with style. When the wave of Hong Kong movies from masters such as John Woo (Better Tomorrow, The Killer and Hard Boiled) were making their international bones in the 1980s and early '90s, they brought wild creativity to the choreography of violence. American descendants include such recent movies as John Wick.

Morel brings little by way of twisted panache to the movie's ample violence, which is presented without much by way of directorial innovation.

The supporting cast includes John Ortiz as an LA cop, John Gallagher Jr. as another detective and Juan Pablo Raba as head of the drug cartel. Each of these characters has his own reason for wanting to corral Riley, an avenging angel who has been lionized by Los Angeles' homeless and on social media.

This isn't a case in which there's reason to fault any performance. Blame the movie's shamelessly derivative plot, its joyless overkill and a blatant end-of-picture suggestion that sequels may loom.

Perhaps naively, we expect an uplift from summer movie fatigue come September. Labor Day may have passed, but with Peppermint, the dog days continue. Peppermint, an ice cream flavor for which Riley's daughter fleetingly expresses fondness, may add flavor to desserts and chewing gum; it doesn't do much for this movie.