Drugs and despair in the streets of Detroit 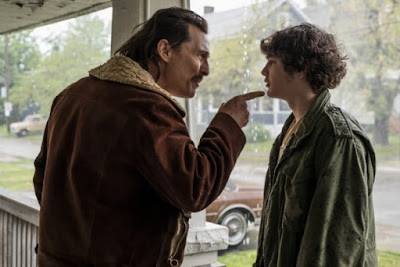 You can tell from this list, and I've abbreviated it, that the new movie White Boy Rick spends little time traversing feel-good turf. Based on a true story, White Boy Rick plunges into Detroit's economic decay during the free-wheeling 1980s.

White Boy Rick focuses on three tumultuous years in the life of Rick Wershe Jr. (Richie Merritt) as he moves from a being a wayward 14-year-old with a father (Matthew McConaughey) who traffics in illegal guns to a cocaine peddler to an FBI informant and, finally, to his inevitable identity: prisoner.

In telling Rick's story, director Yann Demange pushes McConaughey into more of a supporting role than you might expect. This time, McConaughey plays a dirtbag hustler with a difference. Richard Wershe Sr. lacks the charm of some of the rogues McConaughey previously has played.

Aware of his mammoth failures as a father, Richard knows he has nothing to give his son, but the tricks of an illegal trade. McConaughey's performance hints at a sad self-awareness that borders on the tragic.

As Demange tells Rick's story, the movie evokes the ragged, jittery style of the '70s, chopping its way through lives that would be utterly empty if not for trouble.

Early on, Ricky falls in with a group of black drug dealers led by Johnny Curry (a quietly scary Jonathan Majors). Johnny's younger brother Boo (RJ Cyler), Ricky's only real friend, brings Ricky into a gang in which he's the only white guy.

For a time, it's all fun and games as Ricky finds friends and family-like ties among a group of black men who have connections to City Hall. Finally, Rick belongs to something -- or thinks he does.

Meanwhile -- and White Boy Rick is a movie of many "meanwhiles" -- Rick's sister Dawn (Bel Powley) wallows in a drug-addicted life that brings her to the edge of physical ruin. Ravaged by crack, her face seems to be rotting right along with Detroit's declining industrial landscape.

Ricky also draws the attention of two FBI agents (Jennifer Jason Leigh and Rory Cochrane) who want Ricky to help them bring Johnny down. Ricky's given an impossible choice: Either he informs for the FBI or the FBI will shut down his father's illegal gun business. Family ties win out.

Some of the movie's scenes are given a humorous twist -- few greater than the movie's prologue which finds father and son arriving home from a successful buy at a gun show trying to convince the drug-addicted Dawn to accompany them for frozen custard, a ludicrous and inevitably futile stab at familial normalcy.

But harsh realities overshadow humor, even when it comes from Ricky's grandparents (Bruce Dern and Piper Laurie). Grandma keeps a pistol in her oven.

Merritt, who has no previous acting experience, gives a raw, natural performance as a kid who never entirely sells out his innocence. When Rick begs his father to join him in the drug business, he's not so much acting the thug as pleading for the life of his family and the ability to sustain it the only way he knows.

White Boy Rick isn't a perfect movie, perhaps because it never entirely convinces us that there's anything major to be gained from watching these characters fall prey to their devastated environment. Still, there's something to be said for movies that insist on shining realistic light on society's margins.

White Boy Rick makes a last-minute attempt to criticize the justice system that ultimately betrays Ricky, but the feeling one draws from the movie has less to do with rage at judicial inequity than with the bone-deep despair that stems from watching so many lives swirl desperately before going down the drain.