The wild and strange west

The Sisters Brothers tells the story of hitmen siblings. 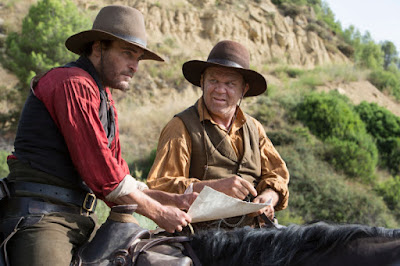 Some Westerns aim to uphold frontier mythology; others want to drag that mythology into the muddy grit of reality. And some don't necessarily want to do either. The Sisters Brothers seems to fit into that latter category; it's a strangely entertaining, slightly off-kilter take on the American West during a time of transition.

The Sisters Brothers (Joaquin Phoenix and John C. Reilly) are hitmen who work for a ruthless character known as the Commodore (Rutger Hauer). But these two gunmen are not like other gunfighters you've seen before. They're more brutal than slick and they banter and argue as only siblings can.

Based on a novel by Patrick deWitt, The Sister's Brothers takes French director Jacques Audiard (Rust and Bone, Dheepan and The Prophet) to the northwestern US -- Oregon mostly -- to follow the twisted adventures of brothers who have developed a proud level of expertise in their chosen occupation.

Not surprisingly, the brothers aren't always on the same page. Brother Eli (Reilly) has grown weary of killing people. He longs for the tenderness of home and hearth. He wants to retire. Brother Charlie sees no reason to quit, so long as the Commodore keeps giving them lucrative assignments.

Perhaps to let us know that we're not about to take a customary Western ride, Audiard begins his movie with a gunfight that takes place in the dark. Flashes from fired weapons pop across the screen along with the deep-throated sound of firing revolvers. If you're interested in assigning meaning to this battle, it might have something to do with Charlie and Eli's aimlessness. They're acting out an old script, but they have no real vision about what they might be pursuing. They're dancing in the dark.

The story soon focuses on the task to which Charlie and Eli currently have been assigned. They're supposed to catch up with Hermann Kermit Warm (Riz Ahmed) and torture him for reasons best discovered in a theater.

For their part, the brothers are task-specific; they've been hired to torture; it's not their job to locate the fleeing Warm. That task falls into the hands of John Morris (Jake Gyllenhaal) a detective whose impeccable diction couldn't seem more out of place in this environment.

As it turns out, Warm has a large agenda: He wants to found a harmonious, non-violent, egalitarian society in Dallas, Texas, and damn if Morris doesn't catch a bit of utopian fever himself.

The performances are marked by idiosyncratic fervor. Phoenix portrays Charlie as a drunk with a quick temper and a taste for life without regret. Reilly gives Eli a dogged quality with hints of unexpected tenderness. A shawl Eli carries with him serves as a kind of security blanket, a reminder that the comfort of a woman might exist somewhere, although it's probably somewhere where Eli isn't.

One of my favorite moments arrives when Charlie asks Eli why he insists on carrying around a scarf he purportedly was given by a woman. It's not a scarf insists Eli; it's a shawl. To him, the distinction means everything.

Audiard sets all this against the backdrop of the still-evolving west. At one point, Morris -- who keeps a diary -- notes that he's visiting settlements that didn't exist three months ago. In another signal of change, Charlie discovers the toothbrush, a device that he uses awkwardly. Think about it. How would you approach a toothbrush if you'd never seen one before?

Audiard allows what symbolism he employs to crawl out of the natural landscape. On the trail, a sleeping Eli swallows a spider that leaves him sick and poisoned. His face becomes distorted and swollen with bloat. The natural world seems to be turning against Eli.

I won't reveal the movie's ending but I'll tell you that Audiard allows his movie to settle like a pot that has been taken off the fire and has begun to lose its boiling fury. Audiard has given us a half-real, half-fantastical portrait of the West, putting it on the shoulders of two brothers who only seem unconstrained by their torments when their horses are bounding across open terrain. As the movie suggests, the West may not be what we once thought it was, but the image of horse and rider hasn't lost its power to stir.