Nicolas Cage and a warrior's revenge

Horror, comedy and blood mix in Mandy, a movie designed to unhinge. 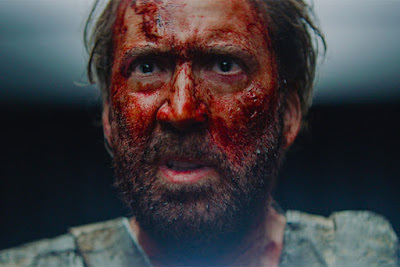 Mandy is the kind of movie that has enlivened the cinematic fringe for years, a repulsive, funny, deadpan helping of horror and revenge that pushes Nicolas Cage -- already a master of violent action -- into terrain so soaked in blood it could support a thousand transfusions.

Director Panos Cosmatos's penchant for extremism matches Cage's and the result is a movie that's likely to amuse, unhinge and terrify those willing to take its nightmarish journey.

A sporadic use of animation and dream sequences thwart any sense of realism as the movie feeds off Cage's ability to turn minimal bits of dialogue into grim jokes. I'm guessing that Cosmatos wants us to see his movie as a grisly fable, as well as an in-joke for those with enough movie savvy to know the ground rules of this sort of febrile expression.

Set in the 1980s, the movie begins by introducing a couple living in isolation in the northwestern woods. Cage's wife Mandy (Andrea Riseborough) seems to have adjusted to life off the grid. But the couple's crazy quilt of a home suggests an inherent lack of stability.

Sure enough, Mandy soon is abducted by the followers of Jeremiah, a wacko cult leader (Linus Roach) who thinks he's touch with a divine voice; the voice tells him that the world is his, which means he has license to kidnap women and turn them into sexual partners. Jeremiah's thinks his lust is holy.

Drugged but unsubmissive, Riseborough's Mandy quickly falls victim to terror. She's stuffed into a burlap sack that's hung from a tree and set on fire. Cage's Red -- strung up, as well -- is forced to watch. Red, however, is left alive.

At this point, the movie uncorks a potent bottle of revenge that features a fearsome looking ax that Red forges like a blacksmith called to battle characters who have embraced their madness.

Energized by currents of unbearable pain, Red turns into a warrior who emerges from a roll in the muck with humanity's darkest impulses. Red moves along a near-mythic trajectory, facing one demonic character after another until he reaches the movie's dark center.

Imagery saturated in red (everything in this world seems blood-soaked) abets the stroboscopic forward motion Costmatos creates as does Cage's performance; as a man fired and numbed by grief, Red comes across as both comic and tragic, a goof that just might not be a joke. When Red stares at the camera, his eyes glow like dark coals. Is he looking evil straight in the eye or catching a glimpse of his own damaged soul?

I hope I've already made the point clear, but just in case: Mandy is not for the squeamish or for those who have no taste for exaggerated, graphically depicted horror. I also wondered whether Cosmatos had decided to name his movie Mandy to shred any memories of the Barry Manilow song with the same title, a bit of pop culture that derives from a whole other universe.